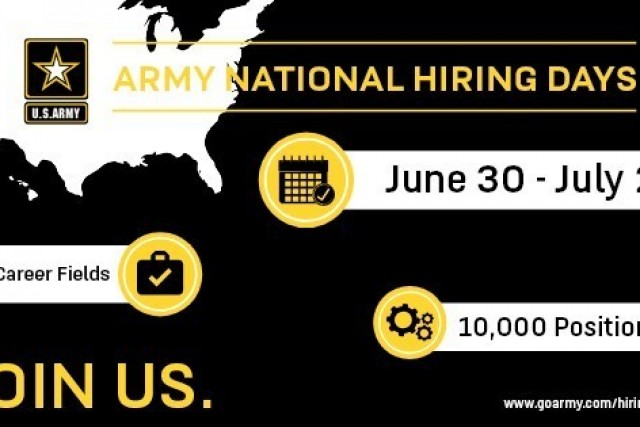 JUNE 25, 2020 – The Army’s top recruiting officer has requested every person affiliated with the Army, including veterans, to be an active recruiter next week, as part of a three-day virtual hiring event that aims to put 10,000 more recruits in boots.

The Army National Hiring Days, which kick off Tuesday, is an all-Army outreach effort to tap into recruiting pools across the country using virtual engagements.

After being ahead by more than 2,200 contracts in mid-March compared to the previous year, the command was forced to temporarily reduce the use of its brick-and-mortar recruiting stations and go entirely virtual due to COVID-19.

“We have to put force protection above mission,” Muth said Tuesday in a discussion for the Association of the U.S. Army’s Noon Report series. “We have to make sure our recruiters and their families know that we care.”

Before the pandemic, the command had actually spent about 20 months trying to digitize efforts in reaching Generation Z youth. Building on previous work, recruiters were still able to conduct 50% to 60% of their normal production until stations reopened in late May, he said.

Now with about 4,000 contracts behind its goal for this time of year, the command has looked for other innovative ways to garner interest in the Army.

Just before the Army birthday on June 14, recruiters held Operation 245, a smaller two-day virtual hiring event that had about 10,000 people commit to speaking with a recruiter. Muth expects that number to eventually result in up to 1,000 contracts.

Active recruiter
The next event, Army National Hiring Days, will be much more widespread with every recruiting battalion slated to conduct media engagements to get the word out, many incorporating Army leaders from operational units.

“We’re just asking everybody [to] help push,” said Muth, who will speak to media in the Baltimore area, where he is originally from. “And what we’re trying to do is two things: drive [potential recruits] to GoArmy.com, or drive them into the stations.”

He also appealed to the entire Army family to help pitch in by sharing social media posts that highlight the event, or to create their own video or message to publish on their accounts asking people to join the service.

The Army offers over 150 different careers, he said, and potential recruits may earn a bonus up to $2,000 by signing up during the three-day event. Qualified applicants may also be eligible for bonuses up to $40,000 or student loan reimbursement up to $65,000, depending on the selected occupation, test scores, contract length, and timeline for shipping to basic training.

There is currently a lot of focus to fill certain combat arms positions, Muth said, but there is also a need in the linguist, cyber, and health care career fields, among others.

Army National Guard recruiters, who operate separately from USAREC, will also be participating in the total force event. “At the end of the day, it’s one Army,” he said.

The general said his command got the idea for the events from McDonald’s, which held a one-day hiring spree in 2011 designed to boost its employment by 7% by hiring 50,000 people.

While he understands the Army is not a fast-food chain, the general said the concept can still generate high-quality applicants and it has support from senior leaders.

The Army is allowed to enlist up to 4% of those who fall under Category IV, people who have scored between the 10th and 31st percentile on the pre-enlistment aptitude test. Last year, the service only recruited 1.8% in that category and Muth expects a similar small figure this year.

By the end of this fiscal year, he expects the Army to sign between 63,000 to 66,000 new recruits. More importantly, he said, is the service’s end-strength goal of 485,000, which also accounts for retention that has been “very high” as more Soldiers decide to stay in longer amid an uncertain civilian job market.

“It’s going to be close, but I think we’re going to make our mission this year,” he said, adding the Army will definitely meet its end-strength goal.

Any new recruits added over the end-strength goal will go toward the next fiscal year.

“It helps start the engine for the next year,” he said, “because we don’t want to exceed end strength. It’s a bill and we have to pay for it.”

Diverse organization
Muth also mentioned the command’s ongoing focus on 22 cities, where there has been more outreach after past recruiting efforts did not perform well.

The Army had typically received large numbers of applicants from the “crooked smile” — a line that stretches from Richmond, Virginia, to Phoenix and everything south of it, he said.

“We were including them, but not at the percentage that we should have based on the qualified [potential recruits] available in that area,” he said.

Last year, recruiting percentages increased up to 18% across those 22 cities after the program started in 2018, he added.

By targeting those areas, the Army can continue to be diverse. Today, minorities comprise about half of the force. Also, when looking at the social-economic levels where recruits come from, nearly half are from the middle class and the other half evenly split between the high and low sides, he said.

While his command has not seen any significant dips in recruiting due to the recent protests of racial injustice, Muth reminded potential recruits that the Army has zero tolerance for racism or discrimination.

“And the second something like that is seen or heard, or whatever impression you may get, it is immediately addressed by the chain of command,” he said. “It has to [be]. That’s the only way we can operate and we will continue to do so.”