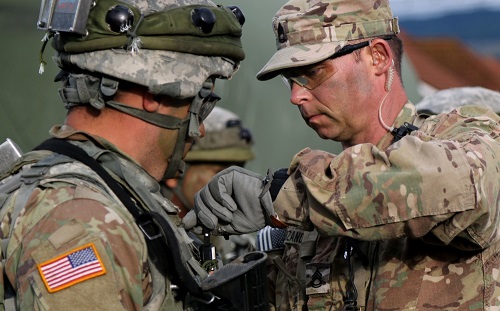 JULY 25, 2017, Bezmer Airbase, Bulgaria – As paratroopers fell from the pink, overcast sky in Bulgaria on July 19, Sgt. First Class Megan Brown carefully observed the exercise in her role as an Army Observer, Coach, Trainer, also known as an OC/T, ready to provide positive and constructive feedback. “Without the Observer, Coach/Trainers (OC/T) from the Joint Multinational Readiness Center (JMRC), you lack the outside point of view,” she said.

Brown was just one of more than 230 Observer, Coach/Trainers assigned to JMRC who supported the Saber Guardian 2017 exercise in Bulgaria, Hungary and Romania from July 11-20.

The largest of the Black Sea Region exercises, Saber Guardian is an annual multinational exercise that was co-hosted by the Bulgarian, Hungarian and Romanian land force components.

The exercise consisted of multiple events across Europe including command post exercises, live fires, river crossings and a mass casualty exercise, which required simultaneous OC/T support at all events.

The OC/Ts not only provide world class training and feedback at their home station in Hohenfels Training Area (HTA), Germany, but they can also deliver the same quality of expert mentorship as an exportable capability, which is what they did this summer.

“We can give perspectives from all over,” said Brown, an OC/T with the Timberwolves team. “We don’t need our training area to be able to give our expert feedback. We can give it anywhere, so utilizing us all over the place is great.”

The same-valued exportable capability allows for other countries to always have an opportunity for interoperable training across all warfighting functions such as maneuver, logistics training, close air support, engineering, military police, military intelligence, fire support and artillery, aviation, as well as brigade operations.

“We have pretty much the entire package of what ground forces would need,” said Sgt. First Class Bradley Kauwe, an OC/T with the Raptor team.

Kauwe, a combat engineer, was one of the many OC/Ts who provided support during night operations, such as a wet gap crossing event in Valcea, Romania, July 16. He observed Dutch, German, Romanian and U.S. soldiers working together to build three bridges over the same river in order for the maneuver units to reach their objective.

The multinational event was an opportunity for JMRC’s OC/Ts to apply their distinctive skills in building and sustaining strong relationships with allies.

“I think our OC/Ts have a unique level of experience when it comes to working with different units,” said Sgt. First Class Sebastian Chrzanowski, another Raptor OC/T. “We have the experience of working with multinational partners, which is not readily available at other combat training centers.”

Although the OC/Ts are already familiar with operating in a complex multinational environment back at HTA, operating away from home station allows them to fully understand other multinational units’ backgrounds and proficiency levels.

For example, building a bridge is something that can’t be done at HTA due to the fact there isn’t a river over which to build bridges. So for Kauwe and Chrzanowski, they were able to visually understand the capabilities of the various units who participated in the event.

In addition to gaining a greater understanding of the training audience, receiving feedback from units is also a critical function for an OC/T.

Some of the after-action reviews Kauwe and Chrzanowski received from an event in Hungary led to higher headquarters’ awareness of a shortcoming with the NATO Standardization Agreement and U.S. doctrine. The feedback called for revisions in order to improve the effectiveness of the interoperable force, one of the reasons why multinational exercises like Saber Guardian 17 exist.

“When we get feedback from the units about what we are doing, it helps us put more stuff in our tool bags,” said Brown. “It helps us become better.”

Both the OC/Ts and the training audience were able to provide instrumental feedback that was geared at improving interoperability training in the European theater.