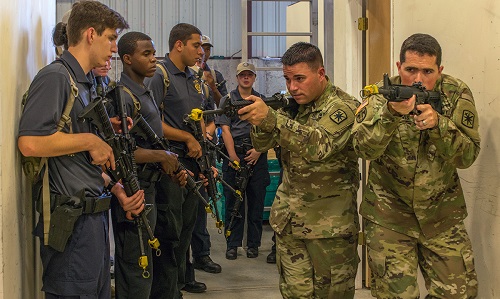 Boykin said the goal was for these explorers to “walk away with a positive experience about the Army and the Military Police Corps, encouraging them to want to pursue a career in law enforcement.”

The explorers were given hands-on training that set Fort Leonard Wood apart from the other four national academies, which include the Drug Enforcement Agency, United States Marshals and the United States Secret Service.

“This academy is one of the best,” said Xaimara Pereira, national recruiter, U.S. Customs and Border Protection in Puerto Rico. “[Fort Leonard Wood] is the only one with the hands-on experience and the Army experience.”

Pereira has been a sponsor for NLEEA for several years. She was an explorer as a teenager starting in 1995. This is her second time being a sponsor for the Fort Leonard Wood academy.

Morales said the goal in his class was for the explorers to hone in on situational awareness and teamwork.

“Essentially, what we want is for them to understand the concepts and overviews,” Morales said. He went on to say his hope is for the explorers to walk away knowing “how they can be effective, overall, in a short amount of time.”

“I want them to open their eyes to the world around them,” Jameson said. “If they see injustice, I want them to stand up for each other.”

During their three hours at the forensic science training facility, explorers were given an inside look at cases Jameson has personally worked. He walked them through investigations and shared with them that it takes more than training to do this work.

Jameson said he wants them to know “if they are truly interested in law enforcement, what it is going to take to get to that point.”

Jameson took the time to answer questions about law enforcement education, specific cases, and how to achieve goals.

“This makes me want to join the Army just to give back,” explorer Moses Posey said following Jameson’s presentation.

For some, it opened their eyes to new opportunities. For others, like Kyle Davis, it affirmed their desires to pursue a career in law enforcement.

Davis said he recently graduated high school and had plans to attend community college. He stated he was having a great time at Fort Leonard Wood.

“Even if the drill sergeants are being hard on us, I have learned a lot from them. I am so glad I chose to come to this academy,” he said.

After this experience, Davis said he is considering a career in the military police.

“We didn’t hold back. If you get into law enforcement, this is what you will see,” Boykin said.