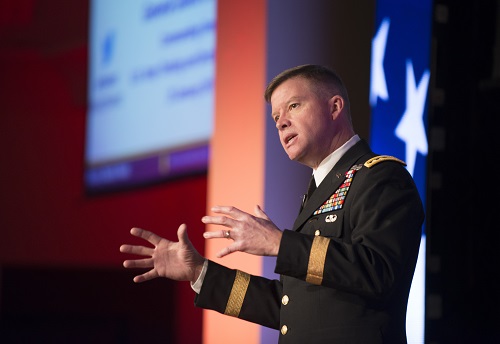 “At the very beginning, we’re trying to make this very much a joint concept,” said Gen. David Perkins, head of the Army Training and Doctrine Command, which is developing the concept.

Together, Army Chief of Staff Gen. Mark Milley and Marine Gen. Robert Neller signed the white paper that provides an overview of the concept to be reviewed by Marine Gen. Joseph Dunford Jr., chairman of the Joint Chiefs of Staff.

Back in October, the Army had officially announced the multi-domain concept which is meant to broaden how the service fights on land — sometimes with the assistance of air assets — and allow for the incorporation of capabilities in the maritime and cyber domains.

According to the concept, Soldiers one day may fire land-based missiles to sink ships or use cyber and electromagnetic tactics to help units maneuver inside enemy territory. The Army has already planned multi-domain exercises to test these and other warfighting ideas, starting with exercises in the Pacific theater this spring, according to Perkins.

“A concept is an idea, and now we have to operationalize it and get feedback from the folks that [will] actually use it,” Perkins said Wednesday, following his keynote speech at the International Armored Vehicles conference.

U.S. Army Pacific is working closely with the joint Pacific Command to finalize these exercises, Perkins said. TRADOC personnel are assisting with their design and will work with the exercise participants to determine new ways of fighting in the multiple domains.

Soldiers in Europe are expected to conduct similar exercises next year, the general said.

“Let’s take what we have now and use it better,” he said. “Where are our shortcomings? Can we highlight them through exercises and help inform our requirements for the future?”

Besides designing large training exercises, he said, TRADOC also is working to encourage units to use the concept in their day-to-day activities and training, so the command can get continuous feedback rather than just one chunk of it after an exercise.

It’s still too early to know when the multi-domain concept will be completed. As Perkins has noted in the past, the Army’s air/land concept took eight years to be implemented after being introduced in 1973. While he expects faster progress on multi-domain, he cautioned that getting all of the armed services on board will be a lengthy process.

Bureaucracy, not the mindset of individuals, may pose the biggest challenge to the concept’s rollout, he said. As Congress typically appropriates money for tangible items, like equipment and vehicles, a change in thinking may be needed to secure funding for less tangible future capabilities.

“We’re trying to take those resources and spread them out to capabilities, and the system is not set up to deliver resources like that,” he said. “It delivers resources for things, not capabilities. How do you start changing the bureaucracy and processes to align with producing what we actually need?”

But a portion of future funding will likely be needed to upgrade combat vehicles so the Army can maintain its edge in full-spectrum warfare.

“I think what you’re going to have is no more one-trick ponies,” the general said. “You can’t just have a vehicle that does this, and that’s all it does.”

Perkins said he would prefer to have “optionally manned” vehicles that can be driven with or without a human crew, depending on the situation. For example, he noted, a Soldier could engage an enemy while an autonomous vehicle provides cover fire.

“I think what you’re absolutely going to find are combat vehicles that have multiple purposes and can operate in multiple modes,” he said.

Perkins acknowledged that much more work remains ahead to figure out how the Army can make use of the emerging domain of cyber in combat.

“Cyber has become a good forcing function for us,” he said. “It’s new and people know it’s new so they don’t necessarily have a preconceived notion on how to do it.”

Soldiers must think more holistically about how all of the domains intersect, Perkins said. During an exercise, for example, he said he once maneuvered an infantry company to fix a cyber issue emanating from a building.

“That was a multi-domain battle solution,” he said. “It wasn’t a bunch of computer scientists busting down the door and taking care of this problem; it was a bunch of infantrymen.”