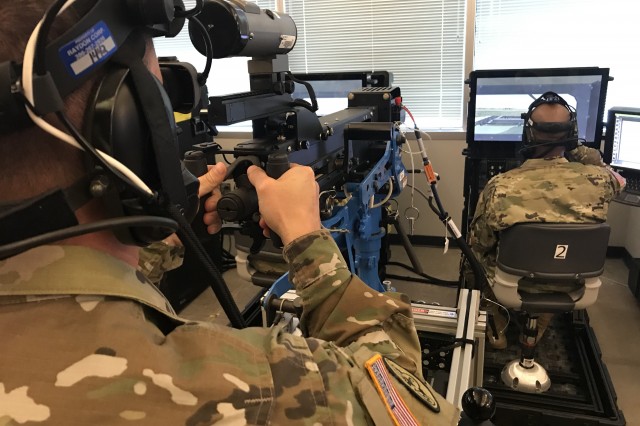 JULY 15, 2020 – The Army’s Synthetic Training Environment Cross-Functional Team soon plans to unveil new labs where it can tap into the innovation of vendors that could one day improve individual and collective training.

At its headquarters in Orlando, the team will open a renovated Technology Integration Facility this week. The facility creates a secured setting, where vendors with promising technology can run it on a military test network.

“We really want to revolutionize the way the Army trains,” said Maj. Gen. Maria Gervais, who leads the STE CFT, one of eight modernization teams under Army Futures Command.

The team’s goal is to establish a common synthetic environment, where live, virtual and constructive training can be converged, she said. The Army currently does that at 12 permanent sites, but they are mainly for the active-duty component and require long planning timelines and lots of resources such as contractors to operate the event.

“We’re trying to get after common standards, common data, common terrain and an open architecture” to enable rapid integration of future plug-and-play trainers, she said Thursday during the Austin Dialogue on Innovation in Defense online event.

The team, along with its Navy partners, will also open a “Technology Grove” in early August. It will serve as an incubator lab where vendors, particularly small businesses, can demonstrate their technology.

“We’ll look under the hood and give you feedback right there if you’re on the right track or not,” she said, adding that promising technology may then move to the Technology Integration Facility for rigorous testing.

App store
The Army’s STE information system, which is currently in development, will serve similar to an operating system on a smartphone, she said.

When the iPhone was first released, she said, it only had a handful of standard applications developed by Apple. The company then created its App Store, which now has over 2 million apps available to download on iPhones.

The STE information system will have three baseline apps: training simulation software that will drive simulations; training management tools to plan, execute and assess training; and One World Terrain that will be 3-D and readily accessible either on hand or pulled from a commercial asset into simulators in less than 72 hours, she said.

Her team aims to build on those apps by leveraging the work of vendors in the $100 billion-plus virtual, gaming and telecommunications industry, she said.

“We’ve seen that the gaming technology is advancing at a rate far faster than we can probably keep up with,” she said. “We want to understand what is in the realm of the possible, and work with innovative small businesses and academia.”

The team has already had success with the Squad Immersive Virtual Trainer, which will begin to be fielded next year as part of the Integrated Visual Augmentation System. The IVAS is a mixed-reality, heads-up display that overlays simulated imagery within a Soldier’s view of the real world.

Future challenges
The team, though, faces many hurdles as it crafts new, realistic training systems. One of its top needs is training-specific artificial intelligence that can determine when to intervene with intelligent tutoring.

A second one is to develop free-thinking, non-scripted, non-player characters, which are still inadequate in today’s games and simulations, she said. Her team would like to apply machine learning techniques that could make characters more adaptive.

“We need to get to a free-thinking enemy, so that we can provide the best training possible,” she said.

A third challenge deals with automating the cleanup of terrain in simulations. Artists now manually do this, which takes time and additional resources.

Another effort to reduce overhead is human controller replacements. AI is still not mature enough to execute collective training simulations without human control, which can be very costly. In a corps-level exercise, for instance, the Army brings in about 1,200 contractors to help run simulations, she said.

“We’ve got to figure out a better way to make it less costly to the Army,” she said, “and also to drive down some of our planning timelines that are typically about 120 days to execute those types of operations.”

And lastly, the team is looking for ways to effectively manage all the data that is associated with future warfare simulations. As an example, a brigade-level exercise has about 2 million entities that have to be replicated and handled. But for larger exercises using perhaps the terrain of a megacity, those entities can jump to roughly 10 million that all have to be synchronized and timed.