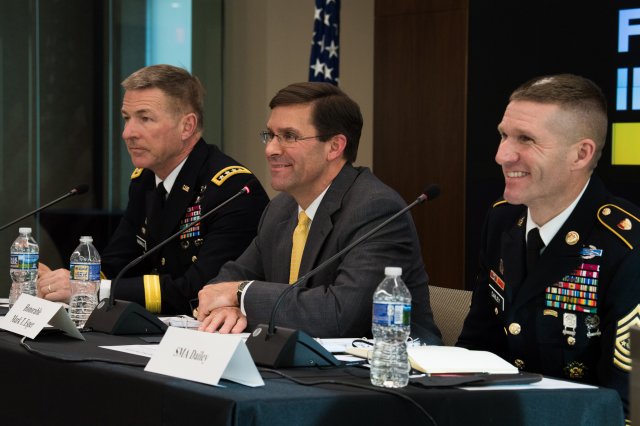 Policy changes to improve childcare, spouse employment, military housing and the transportation of household goods are currently underway, they said.

With more than half of Soldiers married and over 40 percent with children, Vice Chief of Staff Gen. James C. McConville called the Army a “family business” that should be treated as such.

“If we want them to stay and serve, we have to take care of them,” he said during a forum hosted by the Association of the U.S. Army. “We enlist Soldiers, but we retain families.”

CHILDCARE
The lack of adequate childcare at installations, particularly overseas, has been a major issue Army Secretary Mark T. Esper and his wife frequently heard during their travels to installations.

In response, Esper said there are policy changes in the works. One of them includes the ability to hire staff at child development centers on Army installations even quicker.

“In many cases, the reason why our child development centers are not at full capacity is [that] we have an insufficient number of providers,” he said.

JOBS FOR SPOUSES
Spouse employment can be closely related, he said, adding he supports the idea of having more spouses run childcare businesses from home in a way to help solve both issues.

When he came onboard last year, Esper said it took the Army an average of 134 days for a civilian to be hired.

“You can see the challenge,” he said. “No one is going to wait 134 days or by the time you do another opportunity has come before you or it’s time to [move] again.”

As of now, the Army has lowered the waiting period by 10 percent. His goal, he said, is to decrease it to 60 days or less.

Just before the forum, Esper said he was told the Army would soon receive new direct hiring authority from the Defense Department, which would allow people in certain specialties to be hired in a matter of weeks.

A new policy for the Priority Placement Program is slated to come out soon, too, giving the Army another tool to quickly hire applicants.

The Army, he noted, is also moving toward standardized job descriptions and eliminating duplicative boards that take up weeks of time in the hiring process.

Spouses will also be able to recoup the costs of transferring professional licenses when they move to another installation, he said, as part of a new policy being developed.

Transition assistance centers currently have a lot of resources available to spouses and can help them find work, too.

“They never turn a family member away,” said Sgt. Maj. of the Army Daniel A. Dailey.

Many home businesses run by spouses could also get the green light with a directive that was recently clarified stating that they do not compete with commercial businesses on post.

Commanders have also been instructed to develop a clear, easy-to-follow application process for those interested in having a home business, Esper said.

“We’ll be sending out more directives to the Army, but again, we want to make sure that spouses have the ability to set up home businesses in their homes and help provide for their family if that’s the reason why they’re doing it,” he said.

The leaders also discussed ways to reduce moves and stabilize families at one installation, which could help spouses who already have great jobs they do not want to leave.

“We are taking a hard look at that right now,” McConville said. “One size does not fit all.”

The Army’s upcoming talent management system, for instance, could allow Soldiers to pick where they want to serve for an extended period of time.

“As long as you’re in a position where you’re contributing and you want to stay there, we’ll let you stay,” the general said. “I think that can ground families in a much better place so that they can become part of the community and get the jobs they need.”

The command will even open up a 24-hour hotline so Soldiers and their families can track their shipments and remediate any issues.

The Army also plans to double the number of quality assurance inspectors to oversee up to 50 percent of all shipments.

“If they want a quality assurance inspector, we’ll get one out to the families,” Dailey said.

HOUSING
Ongoing inspections of about 40,000 pre-1978 homes will check for lead paint, mold, asbestos and other toxic risks.

Esper said he visited Fort Benning, Georgia, a few months ago to see the remediation efforts taking place on some of the older homes.

By 2026, he added, the Army has plans to eliminate the lowest levels of military housing, known as Q3 and Q4.

“We are certainly committed to providing safe housing for our families,” he said.

McConville also reminded Soldiers and families to always fill out surveys on the contractors in charge of their military housing.

“They’re being paid to provide quality housing for our Soldiers and if they’re not doing that we need to know,” he said.

Feedback on any other issue can also be given directly to the senior leaders, Dailey said, adding a Soldier’s chain of command is always a good first step to fix a problem, too.

While on his visits to installations, he said he often has “fireside chats” to give Soldiers the opportunity to share their concerns.

“It’s important for us to do that, because we have to be the barometer and be the gauge for the force,” Dailey said. “We’re not always perfect, but what I ask is that we continue that feedback.”