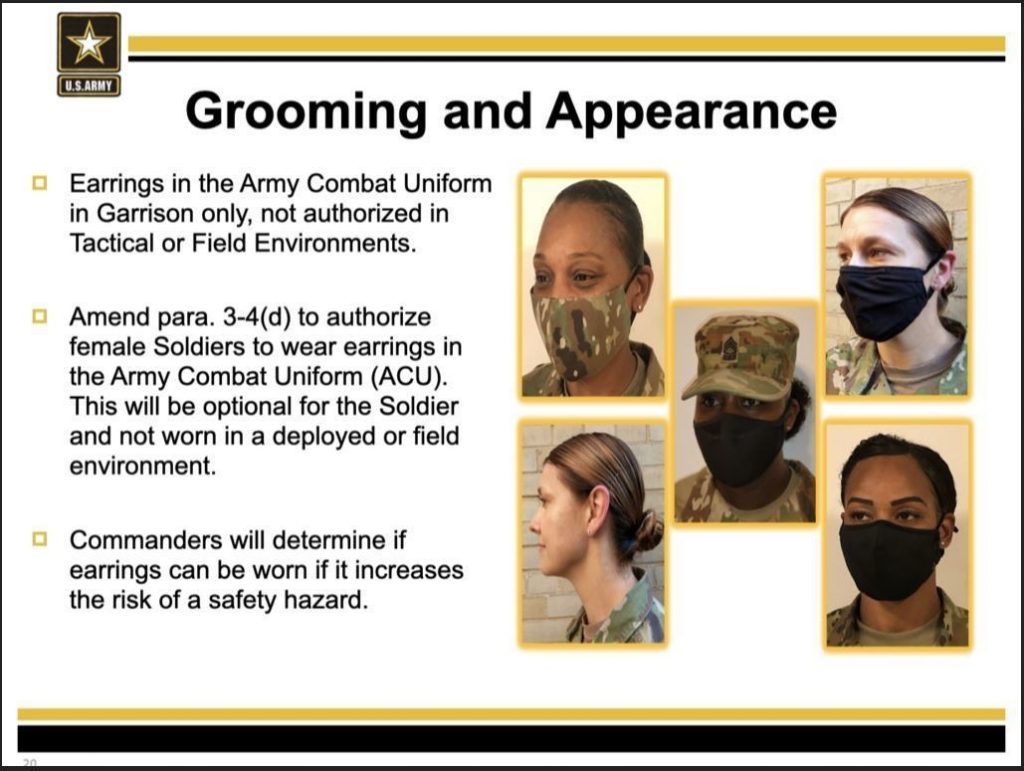 FEBRUARY 18, 2021 – The U.S. Army is scheduled to enact a series of changes to its universal grooming standards on February 25. The move, which marks a substantial deviation from the Army’s previous grooming code, is intended to improve the wellbeing of all Soldiers while incorporating such key themes as diversity and inclusion.

The effort originated from a panel of 17 Soldiers who were tasked with assessing a list of proposed changes relating to health, wellness, and professional appearance, among other factors. Included among the panel members was Sergeant Major Jennifer Redding of the U.S. Army Medical Research and Development Command’s U.S. Army Institute of Surgical Research. The final, approved changes to the code were then officially announced by Sergeant Major of the Army Michael Grinston during a town hall-style meeting held via Facebook Live on January 26.

“I just think from a competitive nature and overall, the reasoning behind it, I think that’s a good start,” said Redding, whose presence on the panel granted the USAMRDC substantial weight in the proceedings.

Notably, the new grooming standards allow for female Soldiers to wear earrings with their Army Combat Uniform, and also include the approval to wear additional colors of lipstick previously not authorized. Further, female Soldiers will be allowed to wear multiple different types of hairstyles under the new standards (so long as said hairstyles maintain a professional appearance and do not impede the use of headgear or other equipment). Additionally, male Soldiers will be allowed to wear clear nail polish. Other changes include the erasure of the minimum hair length requirement for all Soldiers.

“These [changes] aren’t about male or female, this is about an Army standard and how we move forward with the Army and being a more diverse and inclusive team,” said Grinston during the online town hall.

Said Redding, “We all have a little bit of individuality when it comes to how we bring innovative ways to win our Nation’s wars, so with that being said, the autonomy to look a little bit more feminine here-and-there, and then going after the medical portion of it – such as when you can wear [longer hair, earrings, etc.] and when you can’t for safety – all of that together was a very positive win and change for the Army.”

According to Redding, the 17-person panel – of which 15 members were women – met for a total of three days to review and assess potential uniform changes. Panel membership further included a psychologist, a dermatologist and a number of additional dedicated subject matter experts. Suggestions were then submitted to senior leadership for approval.

“I think we’re making a lot of progress in the Army with these new standards,” said USAMRDC Command Sergeant Major Victor Laragione.

The updated grooming standards will supersede the standards outlined in the grooming and appearance section of Army Regulation 670-1 until the next scheduled revision.