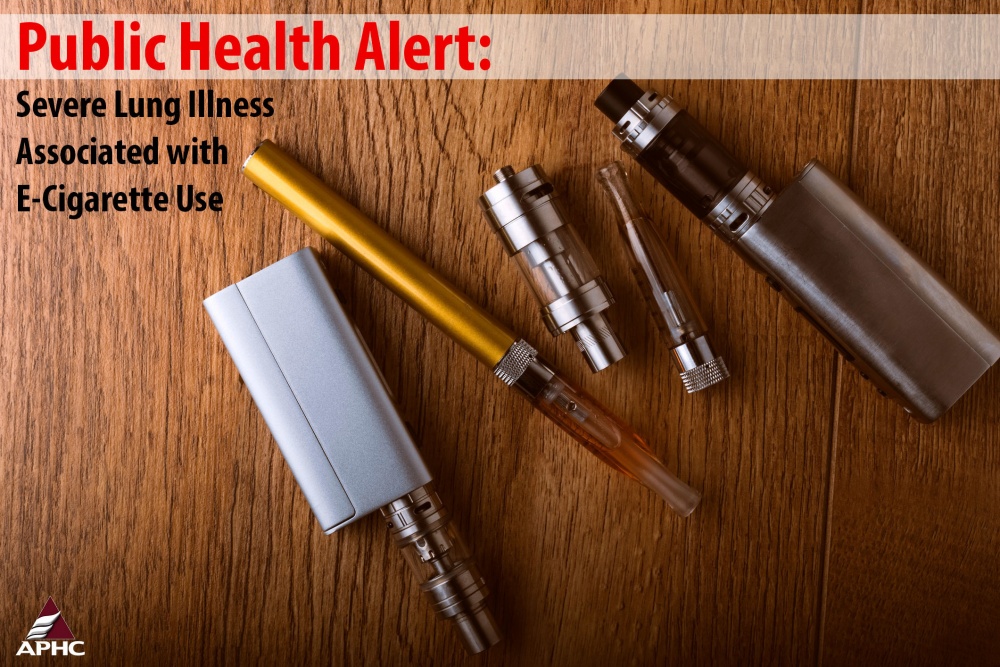 SEPTEMBER 13, 2019 – The Army Public Health Center issued a Public Health Alert Sept. 10 warning Soldiers and Family Members who do not currently use tobacco products to avoid all e-cigarette and vaping products, particularly those sold off the street or modified to add any substances not intended by the manufacturer.

The warning follows reports of more than 450 possible cases of severe lung illness associated with e-cigarette products that have been reported across multiple states, which all have Army installations also located in these states. The U.S. Centers for Disease Control and Prevention have confirmed at least six deaths across multiple states associated with this illness.

All patients have reported recently using e-cigarette products, and many reported using e-cigarettes containing cannabinoid products such as tetrahydrocannabinol or cannabidiol, also known as THC or CBD respectively, said Dr. Amy Millikan Bell, APHC medical advisor. Symptoms appear over the course of a few days to several weeks and include cough, shortness of breath or chest pain; in addition to, nausea, vomiting and diarrhea; and fatigue, fever or weight loss.

“Pulmonary infections do not appear to be causing the symptoms, which have generally not improved with antibiotic treatment alone, according to physicians treating the affected individuals,” said Millikan Bell. “The recent multi-state outbreak of severe lung illness associated with e-cigarette use here in the United States, has raised the level of concern across the country. When otherwise healthy youth and young adults experience severe illness resulting in hospitalization and, in some cases, death, it’s important to remain cautious until exact causes are identified.”

“Until an exact cause of the outbreak is identified, the CDC recommends individuals consider not using any e-cigarette products,” said Dr. Marc A. Williams, a toxicologist and an e-cigarette and vaping expert in APHC’s Toxicology Directorate. “This recent outbreak has elevated concern.”

Although using e-cigarettes or vaping devices has been thought of as safer than smoking, Williams cautions there is considerable uncertainty due to the complex mixture of chemicals in vaping aerosols. Many of these chemicals are not intended to be inhaled to the lungs, where adverse health effects are likely to start.

“There is a lack of quality control standards in the safe manufacture of these devices and products, which should make us all deeply skeptical or at least questioning of the general safety of these devices,” said Williams.

Both the CDC warning and Army Public Health alert also caution against using e-cigarettes or vaping in ways that are not intended by the makers, like dripping or dabbing. Dripping is when users drop e-cigarette solvents onto the hot coils of the e-cigarette, resulting in more concentrated compounds, said Corey Fitzgerald, an APHC public health social worker. Dabbing is when substances containing high levels of THC or CBD are superheated in the device. Adult smokers who are attempting to quit by using e-cigarettes should consult their healthcare provider for consideration of evidence-based alternative methods.

“If you use e-cigarette or vaping products, monitor yourself for respiratory or gastrointestinal symptoms and seek prompt medical attention if you experience the symptoms described above or any other abnormal symptoms,” said Millikan Bell.

Williams says vaping of e-cigarettes is found to be detrimental to performance, readiness, resilience and personal health in military personnel.

“It should be considered a myth that vaping is less harmful than conventional cigarette smoking,” said Williams. “Army researchers have discovered that vaping might be associated with anxiety, increased blood pressure and seizures. In efforts to conserve the fighting strength, and strengthen Army readiness and resilience, vaping of e-cigarettes should be highly discouraged at this time.”

For more information about vaping risks, visit https://phc.amedd.army.mil/topics/healthyliving/tfl/Pages/Vaping.aspx. Additional information is also provided by the CDC at https://emergency.cdc.gov/han/han00421.asp.