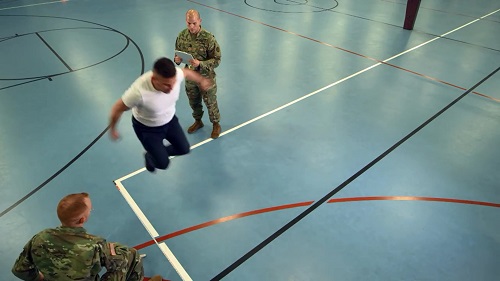 JANUARY 3, 2017, By David Vergun – On Tuesday, the Army will begin administering the Occupational Physical Assessment Test, or OPAT, to all recruits to assess their fitness for military occupational specialties. The OPAT also will be used to assess some Soldiers who are reclassifying into a different MOS.

Army Recruiting Command estimates that the OPAT will be administered to about 80,000 recruits and thousands of cadets annually. Soldiers moving into more physically demanding MOSs also will have to meet the OPAT standard, said Jim Bragg, retention and reclassification branch chief for Army Human Resources Command.

Under the OPAT, there are four physical demand categories, Bragg explained.

The Soldier’s commander will be responsible for ensuring the OPAT is administered prior to approval of a reclassification, Bragg said. As with any reclassification action, the battalion-level or brigade-level career counselor will administer the OPAT.

When it comes to recruiting, Brian Sutton, a spokesman for Army Recruiting Command, said the OPAT is not meant to turn away or weed people out.

“It is designed to put the right people in the right jobs and to ensure we keep our recruits safe while doing so,” he said.

OPAT scoring is gender neutral, he added. All Soldiers, male and female, must pass the same physical standards for their desired career field.

The test will be administered to everyone coming into the Army: officer, enlisted, active, Reserve and Guard, he said. It will be administered by any command responsible for Soldier assessions — including Recruiting Command and Army Cadet Command — after the Soldier swears in but before he or she begins training.

— The “standing long jump,” is designed to assess lower-body power. Participants stand behind a takeoff line with their feet parallel and shoulder-width apart. They jump as far as possible.

— The “seated power throw,” is designed to assess upper-body power. Participants sit on the floor with their lower back against a yoga block and upper back against a wall. They hold a 4.4 pound (2 kilogram) medicine ball with both hands, bring the medicine ball to their chest and then push or throw the medicine ball upwards and outwards at an approximate 45 degree angle. The throw is scored from the wall to the nearest 10 centimeters from where the ball first contacts the ground.

— The “strength deadlift,” is designed to assess lower-body strength. Participants stand inside a hex-bar and perform practice lifts to ensure good technique. They then begin a sequence of lifts starting with 120 pounds, working up to 220 pounds.

— The “interval aerobic run,” always performed last, is designed to assess aerobic capacity. The evaluation involves running “shuttles” or laps between two designated points that are spaced 20 meters apart. The running pace is synchronized with “beeps,” produced by a loud speaker, at specific intervals. As the test progresses, the time between beeps gets shorter, requiring recruits to run faster in order to complete the shuttle. Participants are scored by the level they reach and the number of shuttles they complete.

Here is a quick breakdown of the four physical demand categories incorporated into the OPAT:

— “Black” is for MOSs with heavy physical demands, like those of the combat arms branches, that require lifting or moving 99 pounds or more.

To attain black on the OPAT, the recruit or Soldier would need to achieve a minimum of 5 feet, 3 inches in the standing long jump; 14 feet, 9 inches for the seated power throw; 160 pounds for the strength deadlift; and a 10:14 minute mile over the course of 43 shuttles.

— “Gray” is for MOSs with significant physical demands that require frequent or constant lifting of 41 to 99 pounds and occasional tasks involving moving up to 100 pounds.

To attain gray on the OPAT, the recruit or Soldier would need to achieve a minimum of 4 feet, 7 inches in the standing long jump; 13 feet, 1 inch for the seated power throw; 140 pounds for the strength deadlift; and a 10:20 minute mile over the course of 40 shuttles.

— “Gold” is for MOSs with moderate physical demands, such as cyber, that require frequent or constant lifting of weights up to 40 pounds or when all physical demands are occasional.

To attain gold on the OPAT, the recruit or Soldier would need to achieve a minimum, 3 feet, 11 inches in the standing long jump; 11 feet, 6 inches for the seated power throw; 120 pounds for the strength deadlift; and, a 10:27 minute mile over the course of 36 shuttles.

A recruit or Soldier who attains white has failed to meet OPAT’s minimum standards.

Sutton noted that if a recruit fails the OPAT, he or she can request to retake the test. If the recruit cannot eventually pass the OPAT color designator for his or her MOS, it could be possible to renegotiate the contract that would allow the recruit to go into an MOS with a lower physical demand OPAT category, the minimum being Gold.