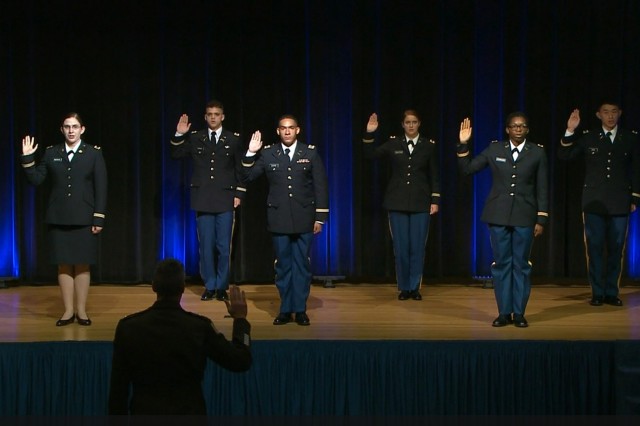 JUNE 15, 2020 – The six cadets stood six feet apart before a mostly empty Pentagon auditorium. Donning their dress blues, they solemnly took their commissioning oath of office as a small group of friends and family looked on.

The new second lieutenants face uncertain times in the Army, which has sent National Guard troops and reservists to serve on the front lines in the battle against COVID-19. Soldiers have also helped enforce safety measures during civil rights protests.

“Tough times don’t last, but tough people do,” said Army Vice Chief of Staff Gen. Joseph M. Martin, who administered the oath of office. “The circumstances that you find yourselves in now won’t last forever. To build this unwavering resiliency, the key is to train — train hard and train often. Train your heart to endure hardship and increase empathy.”

The second lieutenants come from diverse backgrounds which reflect the recruiting strategy of an Army that has sought Soldiers of varying ethnicities and cultures, Martin said.

“Because the Army is a reflection of society, the same issues that plague the nation, plague our ranks,” Martin said. “We are representative of this country. In times of crisis, the greatest opportunity for change exists. Those of you who commission today will be a part of that change and the Army will be better because of it.”

Cadet commissioning virtual ceremony
Second Lts. Mary Catherine Treuting of Marymount University (Virginia) and Anna-Elise Anderson of Georgetown University hail from long lines of service members. Anderson traces her military heritage back to a relative in the American Revolution. She earned a Master of Arts degree in German and European studies and a graduate certificate in refugee and humanitarian emergencies while attending ROTC at Georgetown.

Fellow 2020 graduate Jamarian Easter (Virginia State) enlisted in the National Guard and wanted to contribute to the Army in a larger capacity by joining ROTC. He has served as a 92S clothing repair specialist in the 275th Quartermaster Company, Fort Pickett, Virginia, and as cadet battalion commander of VSU’s Trojan Warrior ROTC Battalion.

Finally, Howard University grad Tristan Hussey will train to be an infantry officer after graduating with a degree in strategic, legal, and management communication.

After taking the oath of office, the ceremony followed with the traditional unveiling of the second lieutenant gold bars, the presentation of commissioning certificates and the first salute. In the first salute, the new lieutenant chooses a non-commissioned officer to give them their first military salute. In return, the officer hands the NCO a silver dollar.

“I was honored to represent both my family and the Hoya Battalion,” said Anderson after the ceremony.

Martin said that the alterations to the annual ceremony didn’t dampen the significance or symbolic value of the event.

“I’m looking at a Pentagon auditorium that is typically full of people,” Martin said. “That does not take away from the importance of this day or the tradition in which we are celebrating a very important part of starting out a career of an officer.”