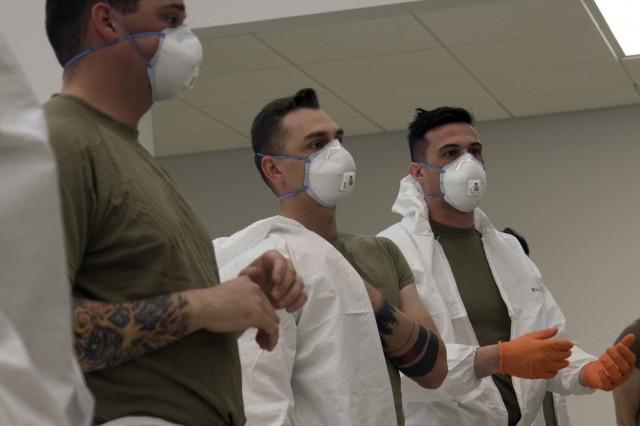 MARCH 20, 2020 – More than 2,000 National Guardsmen are taking on COVID-19 as it continues to sweep the globe and safety measures ramp up, said the Army’s top official.

To date, at least 49 service members throughout the Department of Defense have tested positive for the COVID-19 virus. However, in the weeks ahead, Secretary of the Army Ryan D. McCarthy said he expects those numbers to spike.

To take on this airborne threat, Army leaders plan to ask for roughly $1 billion from Congress to expand their testing supply kits, and early vaccine and antiviral research efforts, he said.

“This is a day-to-day challenge for us,” McCarthy said during an interview Tuesday. “This is all new ground for the Army, and we’re going to make adjustments as we learn more over the next several weeks.”

NATIONAL GUARD ACTIVATIONS
The National Guard is the tip of the spear in the fight against COVID-19, McCarthy said.

Late last week, roughly 400 Guard members took action across six states against the coronavirus. As of Monday, those numbers surged to more than 650 troops in 15 states, and by Wednesday morning, more than 2,000 Guardsmen in 23 states responded to support civil authorities around the country.

“Our Guardsmen are doing a heck of a job with their screening protocols” and how they’re helping their states, McCarthy said.

According to Air Force Gen. Joseph Lengyel, National Guard Bureau chief, the COVID-19 response effort is as large as 54 hurricanes happening concurrently, and ranging in severity from a Category 1 to a Category 5.

MEDICAL RESEARCH
As Guardsmen continue their efforts, the U.S. Army Medical Research and Development team is also working around the clock in the battle against COVID-19, McCarthy said.

At the lab, a multifaceted group of virologists, epidemiologists, toxicologists, medical doctors, veterinarians and other researchers with experience taking on other viruses, such as Zika, Ebola, and SARS are now working on COVID-19. The facility, according to the secretary, is “a national treasure.”

Although researchers expect a 12- to 18-month timeline for an antidote, their labs can collaborate with private-sector researchers and develop a vaccine earlier, according to a Defense officials.

In addition to research, the Army — along with other defense agencies -– plans to dole out their medical supply stashes to public health agencies as they gear up for an influx of COVID-19 patients, said Secretary of Defense Mark Esper during a press briefing Tuesday.

More than 5 million respirator masks and roughly 2,000 deployable ventilators are expected to be given by the DOD to the Department of Health and Human Services to help fight the outbreak.

U.S. FORCES KOREA IN THE TRENCHES
As much of the world battles COVID-19, U.S. Forces Korea has become the paragon for how to fight the virus, McCarthy said, adding its response “has been incredible.”

Since January, USFK troops have been taking on the virus. Of the roughly 58,000 people at USFK daily, only nine –- who all live off post -– have been infected with COVID-19. The key to their success, according to their commander, is treating the epidemic like combat operations.

“We initiated 24/7 operations, with fully operational staff in our ops center and provided daily updates,” said Gen. Robert Abrams, commander of USFK, in a press briefing Friday, adding the importance of swift action and a professional relationship with the South Korean government.

“[Gen. Abrams] has been able to get ahold of the situation and stop it cold,” McCarthy said. “A lot of it was these screening procedures that they put in place and then how quickly they can move and get tests, testing equipment, but then did just the 24-hour vigilance and communications be it social media and other platforms that they’ve been able to, to continue to stay on top of this.”

More than 5,600 miles away in northern Italy at the U.S. Army Africa headquarters, another military installation has also found itself in the middle of the global pandemic.

“[Maj. Gen.] Roger Cloutier [commanding general of USARAF] is surrounded by people that have been exposed — and quite frankly, many lost their lives — and he’s got that installation locked down,” McCarthy said. “We are so proud of him, and his leadership team and the men and women that are stationed there.

“Those overseas leaders are at the forefront of the fight,” he added. “We’ve learned a lot from them. We’re talking to them a lot, trying to get them more support …”

DEFENDER 20 SCALES BACK
Due to the COVID-19 outbreak, many exercises have been scaled back, halted, or canceled completely. One of the largest land exercises in recent memory, Defender 20-Europe, is no exception.

As of Friday, all movement of personnel and equipment from the U.S. to Europe ceased. “The health, safety and readiness of our military, civilians, and family members is our primary concern,” officials said. “There are many details still being worked and discussed with our allies and partners.”

“We’re continually reiterating to our international allies that we are committed to exercises for the foreseeable future,” McCarthy said. “This is an extraordinary set of circumstances and we’re just trying to adjust. We’ll get these back on track as soon as we get through the vaccine protocols and screening, and get to a different place.”

TIME OF UNCERTAINTY
On Monday, a domestic travel ban kicked off around the Army that halted duty station moves and temporary assignments. It is one of the multiple shifts in place to mitigate the exposure of COVID-19.

However, roughly 1,200 recruits recently left for Basic Combat Training after officials had them on standby until a plan was set. First, recruits will be tested for COVID-19 at their military entrance processing stations before departing to one of four Army training facilities.

“We’re looking at how we can put protocols in place and balance the challenge of social distancing with meeting end-strength goals,” McCarthy said. “End strength is critical. We don’t want to be in a position where we are a weakened force by not having end strength to deal with worldwide threats.”

Once troops finish their training, they are screened again before they leave for another location. However, the fine details are still being worked out.

“This is very difficult to manage,” he said. “We’re working on the screening, and the protocols to manage this. National security is a tough business. We’ve got to still be able to grow the force even under these incredibly, quite frankly, extraordinary set of conditions that none of us have ever faced before.”

But, senior leaders are receiving information by the minute, he said. For example, the U.S. is currently on track with Italy with confirmed coronavirus cases. If those numbers continue to rise, Army leaders may reevaluate how basic training is conducted.

“Decisions are being made on a day-by-day basis,” McCarthy added.

He urged all people -– regardless of military status -– to listen to the health professionals, and self-isolate themselves as much as possible.

Other Army readiness programs, like the implementation timeline of the Army Combat Fitness Test, or ACFT, has not changed, McCarthy said. Right now, Army leaders receive information around the clock and are unsure what the next day will bring.

However, McCarthy added, they will continue to evaluate the situation as more information rolls in.

Earlier this week, Army leaders chose Bell and Sikorsky, as well as Boeing, to move forward in the Army’s Future Long-Range Assault Aircraft program, or FLRAA, ahead of the 2030 timeline to field a new assault aircraft.

Although modernization and readiness have pushed forward, in the end it’s people first.

“We’re going to learn a lot more and we’re going to continue to refine our protocols and do what we have to do to take care of our people,” McCarthy said. “But still maintain the readiness to respond to global activity –- it’s a very dangerous and complex world on a good day.

“Army leadership is looking at the measures we need to take to thread the needle between addressing all of the challenges we face globally, and making sure we protect our men and women and their families,” he added. “Have faith that we’re going to get through this.”