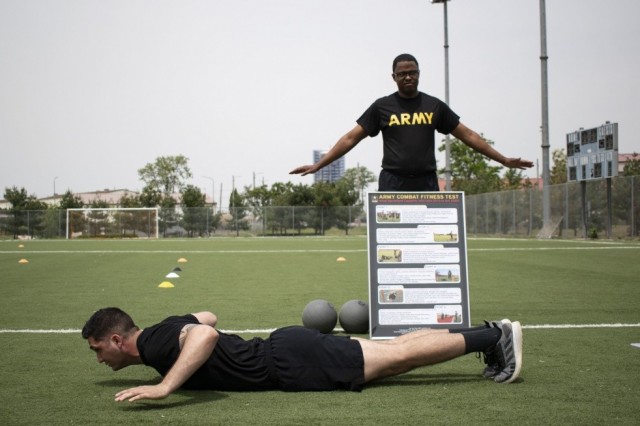 MAY 26, 2020 – Despite some delays in fielding necessary equipment during the COVID-19 pandemic, the Army’s top enlisted leader believes the service will still successfully implement its new Army Combat Fitness Test.

Sgt. Maj. of the Army Michael A. Grinston said Thursday he remains optimistic that most units will have the necessary equipment for the test by June, despite the impact of the virus.

Grinston said he has spoken to representatives at U.S. Army Materiel Command and the fielding process remains on schedule.

There’s “no excuse not to do PT. And it’s always a great opportunity,” he said during an online event, hosted by the Association of the U.S. Army.

Grinston said the ACFT is better suited for physical distancing than its predecessor, the Army Physical Fitness Test, as most of the exercises are done while safely distanced from others.

During the 2-mile run, for instance, a limited number of lanes can be made available to runners and the event does not need to be done in large groups. The hand-release pushups test requires another individual to properly count repetitions, but the tracking person can count at a 6-foot distance.

As of now, both ACFT and APFT requirements are suspended, pending further guidance. Soldiers can use their last APFT score to remain promotion eligible, and the Army extended the expiration dates of previous APFT scores.

When Soldiers eventually take the APFT again, large groups will also be prohibited from running the 2-mile run together. Soldiers counting repetitions on pushups during the APFT must also remain 6 feet apart. While taking the situps test, Soldiers can now use a heavy bar to hold their feet down instead of having another Soldier hold their knees, Grinston said.

“Do I think we’re confident when we start the ACFT that we can do it given the conditions of a COVID-19 environment? Absolutely,” Grinston said.

Soldiers will also be required to wipe down each piece of exercise equipment with sanitizer after completing the corresponding test.

“If you touch the bar for your max deadlift, you wipe the bar down and then you move on to the next station,” Grinston said.

Virtual transition
Grinston lauded the efforts of Army recruiters who have turned to using online tools to contact potential recruits. He said recruiters have used tools that include FaceTime to secure contracts and commitments from recruits. He said that he still expects the service to meet its end-strength goals by the end of the fiscal year.

The Army started changing its recruiting strategy by loosening restrictions on social media use for recruiters and establishing an esports team. The service also established virtual recruiting stations. Grinston said many recruiters have adapted to using the virtual space so well, that he expects recruiters to continue to use online tools after the pandemic has passed.

“We really got ahead of this about a year ago when we started doing different marketing or doing things in the digital space that really led us up to [COVID-19 stay-at-home orders],” Grinston said. “And so when we did the brick and mortar closures, we already had some of the digital recruiting going on. Some of the recruiters just really took off.”