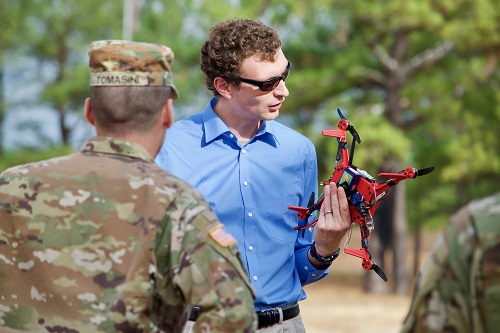 The demonstration, which was part of the Army Expeditionary Warrior Experiments, or AEWE, at Fort Benning, Georgia, showcased new technology designed to provide Soldiers in the field with rapid unmanned aerial vehicle support.

The system allows Soldiers requiring unmanned aerial vehicle support to input their requirements into mission planning software and then receive a 3-D-printed aerial vehicle within 24 hours.

“We thought they’re not going to think that’s fast enough,” Spero added. “[but] the timeline … fits right in line with the way they plan and execute their missions.”

The engineers said they felt the combination of 3-D printing and unmanned aerial vehicles made for a natural technology solution.

“Everybody knows all the great things that can be done with 3-D printers,” said John Gerdes, an engineer on the project. “So we figured let’s assemble these two new technologies and provide a solution to Soldiers that need something right now.”

In the days leading up to the demonstration, the team spent many hours flight testing and verifying the designs to ensure everything would work the way they expected.

“It was good that we didn’t have any mistakes on game day,” observed fellow engineer Nathan Beals. “The day before we did some test flights and worked out some kinks. I think we had the quad up to 55 miles per hour.”

Based on the feedback engineers received from Army leaders, Spero said, his team plans to work on improving noise reduction, standoff distance, and agility, as well as increasing the 3-D-printed drone’s payload capacity.

“I’m very optimistic that most of those are achievable,” Spero said. “I think the hardest one … is the heavy payload.”

At the event, the engineers discovered that the Soldiers were fascinated by the 3-D printing technology, Spero said.

“Before we even started the briefing, we set up the 3-D printer in the conference room and started a print job,” Spero said.

The researchers printed a Picatinny rail, which is a bracket used to mount accessories on a small arms weapon, such as an M4 carbine. In about two and a half hours, they had a rail that fit the Soldiers’ weapons perfectly.

They asked the group of Soldiers what other kinds of 3-D printed items they could use. In a matter of hours, the team presented a variety of functional printed parts that impressed the Soldiers.

The Army engineers say they will continue to collaborate with partners at the Georgia Tech’s Aerospace Systems Design Lab as they refine technologies for future Soldiers.