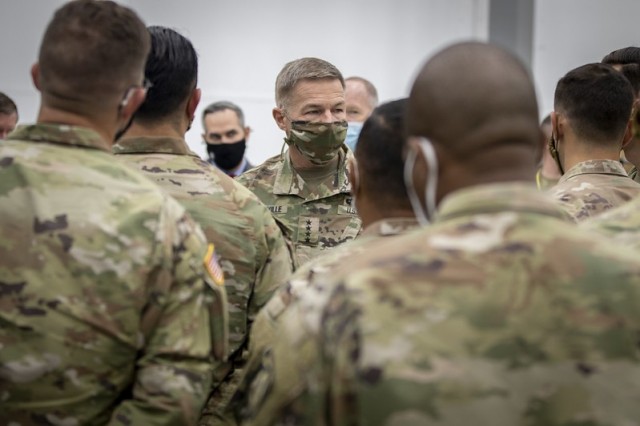 MARCH 18, 2021 – The Army is in the middle of the most significant transformation in the past four decades, as the service continues to advance initiatives to support personnel under the Army People Strategy, all while maintaining critical modernization priorities to bolster joint multi-domain operations.

In the coming weeks, an update will be released to expand on the Army’s multi-domain operations in 2028 pamphlet that was published in 2018, Army Chief of Staff Gen. James C. McConville said Tuesday.

The new pamphlet will further describe how the Army plans to enhance capabilities across all domains — land, sea, air, space, and cyberspace -– to achieve overmatch against a near-peer competitor like China or Russia, he said during the Association of the U.S. Army’s Global Force Next virtual conference.

“Overmatch will belong to the side that can make better decisions faster,” McConville said. “To meet emerging challenges, the Army is boldly transforming to provide the joint force with speed, range and convergence [with] cutting-edge technologies that will be needed to provide decision dominance.”

The Army is slated to deliver a series of long-range precision fires by fiscal year 2023, including the first hypersonic weapon, precision strike missile systems and a prototype mid-range missile capability, he said.

The Army chief also discussed the need for additional multi-domain task forces — two in the Indo-Pacific region and a third in Europe. Each task force provides intelligence, information operations, cyber, electronic warfare and space effects, or I2CEWS, with the option to deter a competitor with an equipped LRPF capability.

“The Army will provide multiple options to the combatant commanders, [and provide] multiple dilemmas to our adversaries,” McConville said.

Further consideration of the service’s role in the Arctic region is also under review, he said, as the Army recently completed a new Arctic strategy to protect regional assets primarily throughout Alaska.

“We can envision a multi-domain task force maybe operating in that area to … provide an anti-access/area denial capability,” McConville said.

Part of the strategy will consider ways to prepare Soldiers to operate in a harsh arctic environment through proper training in a similar setting.

“Many of our competitors are focused on the Arctic, [while] our allies and partners have concerns,” he said. “I think working together is very important. We need to protect our interests.”

People first
Despite the many cancelations, postponements, and quarantines that impacted the Army’s mission in the past year, McConville said the force kept pushing forward.

“I could not be prouder of our people. If anything, the challenges of this past year made it clear that we have our priorities right — take care of people first, remain ready, and modernize the Army,” he added.

Readiness is acquired through the proper care of all active-duty, Guard and Reserve personnel, families, Army civilians, veterans and retirees, he said.

A ready force also requires the Army to put systems in place to prevent harmful behaviors that impact readiness, such as sexual harassment/assault, discrimination, and extremism. Soldiers who are willing to build a cohesive team and strengthen the relationships with others can also help prevent suicide or bouts of mental illness.

“When our people feel safe and when they feel valued, they will give you their best,” he said. “Cohesive teams that are highly trained, disciplined, and fit are the most effective forces in combat.”

Proper talent management is also a core requirement to readiness, such as the commander assessment program that will soon include a sergeants major selection process for key leadership positions.

The Army “all begins with people, [by] recruiting the best talent and valuing a person’s knowledge, skills, behaviors, and preferences to get them into the right place at the right time,” he added.

Senior leaders must also finalize the Regionally Aligned Readiness and Modernization Model, or ReARMM, by Oct. 1 to ensure the Army can meet its readiness, modernization, and people requirements.

Units will be regionally aligned under the new model to meet current joint force demand, all while providing Soldiers and families a predictable and sustainable cycle of training, modernization, and mission windows.

“What we want is great power coexistence. That’s why we need peace through strength and a whole-of-government approach that includes a strong military and strong allies and partners.”