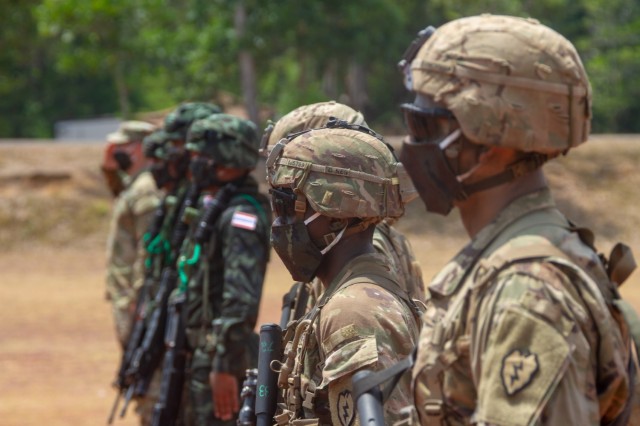 APRIL 7, 2021 – As the Army’s largest service component command, U.S. Army Pacific continuously competes across a vast region between the north and south poles and from the west coast of the U.S. to India, its commander said Tuesday.

“Our daily focus is on competition,” said Gen. Paul LaCamera. “We’ve got to be ready to respond in crisis and we’ve got to be prepared to win in conflict.”

Ongoing training plays a key part in this, since the final area in any conflict is “still the most dangerous piece of ground on the face of the earth,” he said during a discussion with the Center for Strategic and International Studies.

“The focus of making sure that our forces are trained and ready to fight in that last 100 meters is absolutely critical,” he added.

While the COVID-19 pandemic has tempered some training over the past year, LaCamera said safety precautions, such as training bubbles and testing, have allowed many Soldiers to still interact with allies and partners.

Later this year, the Army plans to hold another Defender Pacific exercise, which would see thousands of Soldiers head to the region to train.

Joint team
The Army’s role in great power competition with Russia and China is not necessarily to end up in conflict, but rather deter them, said Gen. James C. McConville, the Army’s chief of staff.

To do this requires transformational changes that are currently underway in the Army, which include modernized equipment, a new talent management system, and updated doctrine and organizations, such as multi-domain task forces.

“We’re in the process right now of taking a look at the future; the type of capabilities that we need to provide for the joint force,” McConville said during the event. “We are aligned with the joint force and we’re aligned with our allies and partners in the region. We know in the future, whether it’s in the Indo-Pacific or other places around the world, we’ll go as a joint team.”

The Army expects to build at least two multi-domain task forces in the region and another one in Europe, he said. The MDTFs can provide long-range precision effects, such as fires and an intelligence, information, cyber, electronic warfare and space, or I2CEWS, element, and possibly air and missile defense and attack aviation capabilities.

The first MDTF, which is based out of Joint Base Lewis-McChord, Washington, has already tested its capabilities during exercises in the region.

“We’re not waiting to get it right before we start deploying it,” McConville said. “We’re getting good feedback from the commanders in the field on what they want this to do as we develop this organization moving forward.”

McConville said it will be up to other government officials to decide where the task forces, or at least parts of them, could be strategically positioned in the future.

“We’re providing options, which become dilemmas to our competitors,” he said. “And the politics or the policy of where they’re actually based and how they’re based will be worked out through the policymakers and the diplomats.”

Arctic strategy
The Army’s newly released Arctic strategy mentioned that a MDTF could initially be based out of Alaska to experiment in the delivery of tactical to strategic effects in the region.

“This experimentation in Alaska will pose an anti-access/aerial denial challenge for rival powers, constraining their operational choices and provides the U.S. with strategic advantage in crisis and conflict,” the strategy reads. “An experimental MDTF in Alaska will also provide opportunities to test Army modernization priorities’ ability to function in extreme environments and explore region-specific operational concepts.”

The strategy also noted the Army may upgrade Alaska’s two-star headquarters into an operational headquarters and create arctic-capable units.

As the polar icecaps melt in the region, it could also create new sea routes that may be contested. Those routes could prevent potential setbacks in shipping, as seen recently on the Suez Canal in Egypt.

“When those sea lanes open up that will save 19 sail days from Asia to western Europe,” LaCamera said. “Our ability to protect our interests rests in our ability to fight.”

To better prepare itself, the Army can lean on its allies and partners to see how they handle the region’s harsh environments, whether it’s in the Arctic, mountains or jungles, he said.

“We’re learning from our partners and allies and understanding how they operate in that,” he said.