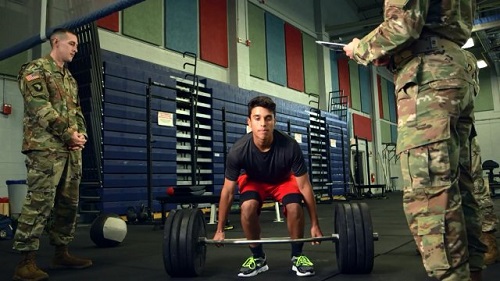 JUNE 2, 2016, WASHINGTON (Army News Service) – The Army currently uses the Armed Services Vocational Aptitude Battery, or ASVAB, as a predictor of a future Soldier’s ability to meet the academic requirements needed to do well in a particular military occupational specialty. This summer, the Army will add the Occupational Physical Assessment Test, or OPAT, as a way to predict a recruit’s physical fitness required to train for the high physical demand tasks for an MOS.

The OPAT is currently being evaluated at a select number of recruiting stations around the Army. It involves four physical fitness tests that together measure a future Soldier’s muscular strength, cardiorespiratory endurance, and lower body and upper body explosive power. The four tests include the standing long jump, the seated power throw, the strength deadlift and the interval aerobic run.

The new test isn’t the first time the Army has used some sort of physical assessment for future Soldiers. In the late 1990s and early 2000s, the Army used the “1-1-1 test,” which involved 1-minute of sit-ups, 1-minute of pushups, and a 1-mile run to evaluate the physical fitness of candidates. The U.S. Military Academy at West Point, New York, currently does the Candidate Fitness Assessment, and the Reserve Officer Training Corps has in the past experimented with physical fitness performance as a requirement for entry into service.

It’s expected that this summer, recruiters around the Army will begin administering the OPAT to all future Soldiers as a way to help place recruits into a best-fit MOS, based on their physical performance, in much the same way the ASVAB is used.

“A decision was made somewhere around 2012, relative to issues on placement on Soldiers into MOSs, especially high physically demanding MOSs, to come up with an assessment that would help better place Soldiers into those demanding MOSs,” said Dr. Whitfield East, a research physiologist with the U.S. Army Center for Initial Military Training. “In particular, the center of gravity was the seven congressionally-restricted combat MOSs. But there are obviously a significant number of other MOS that require high physical demands.”

East said that a team, led by the U.S. Army Research Institute of Environmental Medicine, developed an assessment to measure the physical abilities of Army applicants, so that the Army could better place them into MOSs with high physical demands.

The OPAT was developed following “two and a half years of extensive research on Soldiers performing a large number of events, physical capacity events, and then relating … those against the high physical demand MOS tasks, like putting an 155mm (M109) round in a ammunition rack,” East said.

In addition to guiding future Soldiers into the right MOS, one of the main drivers for that initiative, East said, was to reduce first-term attrition among new Soldiers, including attrition during basic training, advance initial training, and first units of assignment.

Soldiers, he said, are lost to attrition at “every point along the way,” from the reception battalion, through BCT, AIT and at their first unit of assignment. There are many reasons for that loss, including lack of adjustment to the Army, behavioral issues and physical fitness.

“It’s not just the ability to pass the APFT, but really the lack of a fundamental fitness foundation that allows them to train properly,” East said. “I would argue it’s always been more about looking at those foundation levels of fitness that are required to even start training, especially in the higher-demand MOSs.”

The OPAT consists of four individual tests, each designed to meet a specific component of physical fitness that has been deemed important by the Army. Those tests include:

— the “Standing Long Jump,” is designed to assess lower- body power. Recruits stand behind a take-off line with their feet parallel and shoulder-width apart. They will jump as far as possible with a two-foot take-off and landing. Results of the test are measured in centimeters.

— the “Seated Power Throw,” is designed to assess upper-body power. Recruits sit on the floor with their lower back against a yoga block and upper back against a wall. They hold a 4.4 pound (2 kg) medicine ball with both hands, bring the medicine ball to their chest and then push or throw the medicine ball upwards and outwards at an approximate 45 degree angle. The throw is scored from the wall to the nearest 10 centimeters from where the ball first contacts the ground.

— the “Strength Deadlift,” is designed to assess lower-body strength. Recruits stand inside a hex-bar and perform practice lifts to assure good technique. Then they begin a sequence of lifts starting with 120 pounds, and working up to 220 pounds. Recruits are scored by the largest amount of weight they can properly deadlift.

— the “Interval Aerobic Run,” always performed last, is designed to assess aerobic capacity. The test is similar to what is commonly referred to as the “Beep Test.” The evaluation involves running “shuttles” or laps between two designated points that are spaced 20 meters apart. The running pace is synchronized with “beeps,” produced by a loud speaker, at specific intervals. As the test progresses, the time between beeps gets shorter, requiring recruits to run faster in order to complete the shuttle. Recruits are scored by the level they reach and the number of shuttles they complete.

East said the OPAT measures the “five primary domains of physical readiness,” the Army has identified as important for performance. These include muscular strength, muscular endurance, cardiorespiratory endurance, explosive power, and speed.