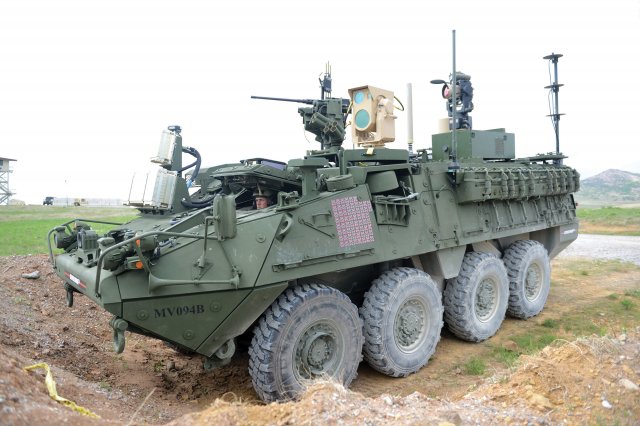 JUNE 10, 2019 – The Army is accelerating its efforts to field a directed-energy prototype system by fiscal year 2022, and hypersonic weapon prototype by fiscal 2023.

The MMHEL is a 50-kilowatt laser retrofit to a modified Stryker vehicle, designed to bolster the Army’s maneuver short-range air defense capabilities, according to officials with the Army Rapid Capabilities and Critical Technologies Office.

The Army is slated to field a four-vehicle battery by late fiscal 2022, Thurgood said. The new system was meant to be maneuverable, while protecting brigade combat teams from unmanned aerial systems, rotary-wing aircraft, and rockets, artillery, and mortars.

Further, the Army will consolidate efforts with the other services and agencies to help improve directed-energy technology, the general added. While the Army is executing a demonstration of 100 kW high-energy laser technology on a larger vehicle platform, it is working with partners to exceed those power levels.

HYPERSONIC WEAPONS
In addition to the MMHEL, the Army is expected to field a four-vehicle battery of long-range hypersonic weapon systems the following fiscal year.

“The word hypersonic has become synonymous with a particular type of missile,” he explained. “Generally, hypersonics means a missile that flies greater than Mach 5 … that is not on ballistic trajectory and maneuvers.”

The hypersonic system will also rely on the Advanced Field Artillery Tactical Data System 7.0, which is currently available to artillerymen, for command and control.

“Within the Army’s modernization plan, there is multi-domain, and there is the Multi-Domain Task Force. Part of that task force [includes] a strategic-fires battalion and in that strategic fires battalion [will be] this [hypersonic] weapons platform,” Thurgood said.

“It is not long-range artillery. It’s a strategic weapon that will be used … for strategic outcomes,” he added.

RESIDUAL COMBAT CAPABILITY
Overall, the MMHEL and hypersonic systems will both move into the hands of Soldiers as an experimental prototype with a residual combat capability, Thurgood said.

“When I say experimental prototype with residual combat capability, and as we build the battery of hypersonics … that unit will have a combat capability,” Thurgood said. “Those eight rounds are for them to use in combat if the nation decides they want to apply that in a combat scenario. The same [applies] for directed energy.”

In addition to providing an immediate combat capability, Soldiers will have an opportunity to learn the new equipment and understand the “tactics, techniques, and procedures” required to use each system during combat, the general added.

Further, the Army will also receive valuable feedback to help shape potential broader production of each system after they transition to a program of record.

With both systems, “what we’re trying to create [is an] an opportunity for a decision, based on actual use by a Soldier,” he said. “Does this thing do … what we needed it to do? Do we want to continue and make it better, or do we want to have other choices?”