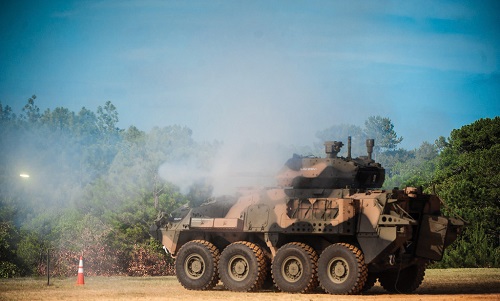 The event was sponsored by the Capabilities Development and Integration Directorate Mounted Requirements Division at the Maneuver Center of Excellence, and the General Dynamics Land Systems and General Dynamics Ordnance and Tactical Systems.

“We are in an interwar period here. The interwar period is critical because it is a time when you must leverage an opportunity to get ready for the next conflict,” said Maj. Gen. Eric Wesley, commanding general of the Maneuver Center of Excellence. “If you don’t leverage that opportunity you’re throwing away a resource that has strategic implications.”

Wesley explained that cooperation between the Army and industry is paramount to a successful partnership.

“We need to be cooperating and collaborating with industry and that is what you see here today,” said Wesley.

Lt. Gen. H. R. McMaster, director of the Army Capabilities Integration Center, spoke about the urgency behind the collaboration with the Army and industry.

“We are facing threats, enemies and adversaries who have watched us very closely in recent years and have adapted their capabilities and developed new capabilities that have resulted in our forces in the future potentially losing our ability to overmatch the enemy in close combat,” said McMaster. “What we are endeavoring to do is to ensure that we stay ahead of these determined and adapted enemies.”

McMaster stressed that every combat unit has to have the combination of mobility, protection and lethality in order to overmatch the enemy.

“What we need is a combat vehicle that allows that appropriate combination,” said McMaster. “Every time you bump into a U.S. Army formation and you’re the enemy, and you make the unwise choice of taking a shot at us, smoke and boots, that is going to be the result on the other end.”