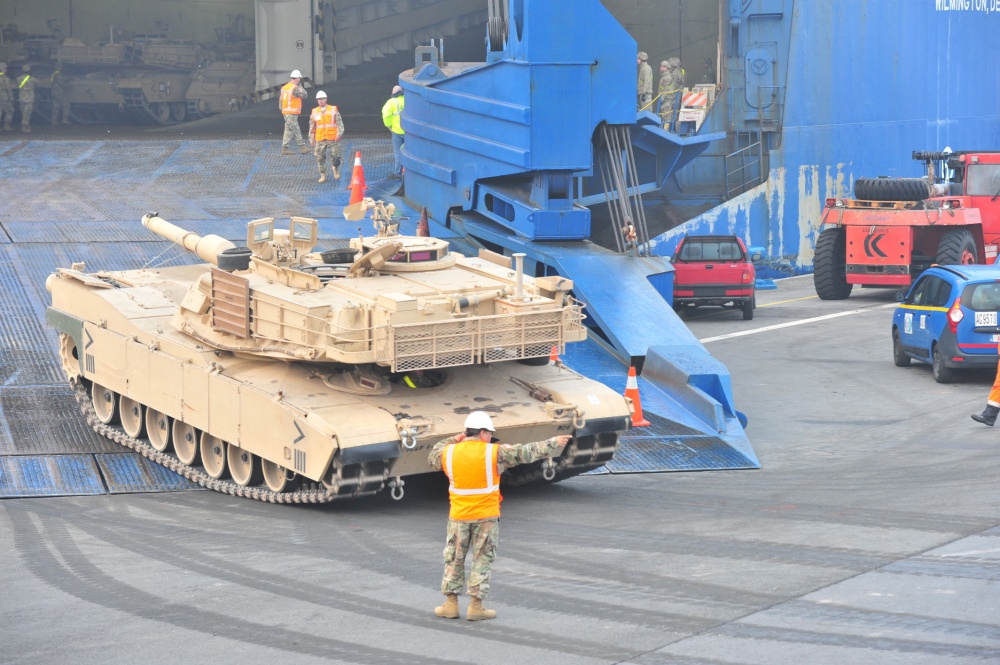 MAY 22, 2018, Antwerp, Belgium – Tanks, trucks and mobile artillery rolled off the first of three ships to arrive at the port here May 20, 2018 as a new U.S. Army armored brigade took up the mission to provide a continuous presence in Eastern Europe.

This is the third iteration of continuing “heel-to-toe” rotations to maintain a U.S. armored brigade in Europe. While the unit will be stationed primarily in Poland, Romania and other Eastern European countries, the equipment arrived through Antwerp to exercise the ability to move equipment across Europe quickly and efficiently using multiple methods of transportation. Antwerp hasn’t been used for a major U.S. military movement of this nature for the last 10 to 20 years.

“It’s very thrilling to come back to Antwerp after so long and see the capacity you have here and bring United States armored units through Antwerp,” said Maj. Gen. Steven Shapiro, commanding general, 21st Theater Sustainment Command. “Sometimes what is old is new again, and that is coming in here. Antwerp and Rotterdam were major ports when we were operating during the Cold War…We are coming back to Antwerp in a big way.”

Shapiro added that the movement of vehicles will move via convoy, line-haul, river barge and train in what he called a multi-modal movement. He emphasized that this mission increases the unit’s capabilities and allows the U.S. to become better working partners with allies such as Belgium.

A part of the unit will arrive immediately move to Poland to participate in the upcoming Saber Strike exercise while other pieces of equipment will go to France for a Paris military event.

“It’s a totally different type of deployment,” said Col. Wilson “Trey” Rutherford IV, commander, 1/1CD. “We could have gone into the port of Gdansk, (Poland), which is much closer, but we wanted to exercise this port, exercise the barge movement, the line haul and the convoys. This is very different from the 2/1 (ABCT) and 3/4 (ABCT) deployments, but the goal is to learn as much as we can.”

Rutherford said he couldn’t be more happy with Antwerp and the support from the Belgian military, which provided security and the port.

“I’m just excited to be here,” he said. “I started my career in Germany, and now 25 years later I am taking the brigade to Poland.”

He added that the brigade had been preparing for about a year to take on the mission and coordinate the movement from Texas to Antwerp, and from there to the rest of Europe to support the Atlantic Resolve mission.

About 2,500 pieces of equipment will come through the port including 87 M1 Abrams tanks, 138 armored personnel carriers, 18 Paladin self-propelled howitzers, and more than a thousand other military vehicles. 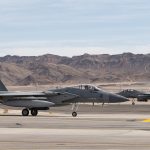 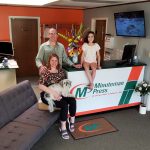