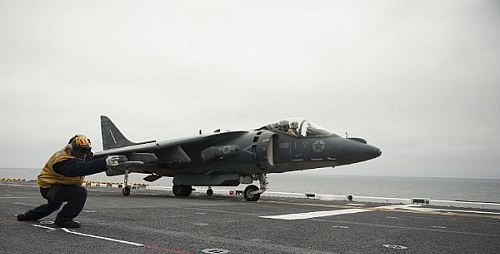 MAY 24, 2016, PACIFIC OCEAN (NNS) – Flight operations is an essential piece of the Navy’s mission of maintaining freedom of the seas, deterring aggression and having a capable warfighting force. The Navy’s key assets for aviation requirements are aircraft carriers and amphibious assault ships.

As an amphibious assault ship optimized for Marine aviation, USS America (LHA 6) departed its homeport of San Diego May 16 and set out to sea with a clear purpose.

The ship’s main objective was to recertify the flight deck for launching and recovering aircraft and fulfilling the ship’s future role as part of Amphibious Squadron 3 and Expeditionary Strike Group 3.

The recertification process kicked off with a level of knowledge written test every Sailor involved with the flight deck completed. America’s Sailors passed the exam with a combined overall score of 92 percent, surpassing the fleet average.

The next phase was hangar and flight deck drills which consisted of six different fire scenarios to include aircraft salvages utilizing the crash forklift and mobile crash crane, and fire drills with and without ordnance.

“The drills were hectic, but it felt good to get back out there,” said Aviation Boatswain’s Mate (Handling) Airman Isaac Morelli, a crash-and-salvage team member. “We (Air Department) knocked it out pretty well. We scored 100 percent on our drill, and knowing our crash crew, we weren’t surprised.”

After the ship proved it could handle the worst of scenarios, ATG began evaluating the crew’s ability to launch and recover aircraft. The ship was required to perform more than 90 aircraft launches and landings broken down by the aircraft type during the day and at night, both with and without night vision devices.

“They are retaining that level of knowledge that is required to do the job and blew the flight deck drills out of the water,” said Aviation Boatswain’s Mate (Handling) 1st Class Ian Shaff, V-1 division’s leading petty officer. “With my guys scoring 100 percent on AVCERT (aviation certification), I couldn’t be more proud. We went out there and did it safely and professionally, and it’ll only get better as we go forward.”

America’s leadership also expressed their pride of the ship’s aviation team for both their performance on deck and the level of knowledge they obtained through training.

“I am extremely proud of our Sailors and Marines today, as we recertified America to do what she was built for; delivering Marines by sea and air whenever, wherever they are needed in peace and in war,” said Capt. Michael W. Baze, America’s commanding officer. “The whole ship trained hard to achieve this goal, and that training paid off. But that is only the beginning. We must keep the focus and momentum going so we may provide the best, safest support to our Marine and Navy brothers and sisters in this critical warfighting area.”

America’s crew was largely thrilled to be able to get back on the flight deck after completing a 10-month post shakedown availability and do the jobs they are trained to do.

“It feels great to be out there again; this is what I joined the military to do,” said Aviation Boatswain’s Mate (Fuel) Airman Kristopher Pensata, a chock and chain crew member. “I joined to be out there in the action, under helicopters and planes. It’s a lot of fun to me.”

Now that America’s flight deck is recertified, it can now begin helping local Marine and Navy aviators maintain their qualifications for their aircraft.

“The true benefit for the Navy and Marine Corps team is having the Marine side of the house sustain their qualifications as pilots,” said Senior Chief Aviation Boatswain’s Mate (Handling) Marcus Aguirre, V-1 division leading chief petty officer. “At the same time, we sustain ourselves by maintaining our readiness. It’s not just us, it’s an all hands effort spanning multiple departments from the high purity water to the electricity we use and the food we eat. Its not just the flight deck team, its an all hand evolution.”