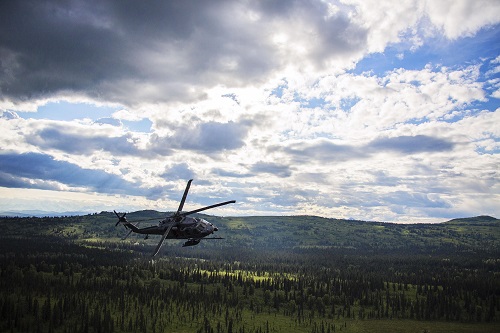 According to Tech. Sgt. Matt Carse, a controller with the Alaska Rescue Coordination Center, the Alaska State Troopers requested support from the Alaska Air National Guard because they needed a helicopter capable of hoisting the injured man from his location.

“The Alaska State Troopers search-and-rescue coordinator relayed that a LifeMed helicopter was on scene, but was unable to get to the hiker’s location due to the steep, rough terrain,” said Carse.

Carse said that additional people in the injured man’s party contacted the AST and RCC via cellphones and were tending to him.

“LifeMed landed their helicopter on top of Flat Top and provided gear to warm the individual due to him showing signs of hypothermia,”said Carse.

Guardian Angels are a two-person team comprised of a highly trained pararescueman and a combat rescue officer. These elite warriors are experts in water and land rescue, and are all nationally registered paramedics who specialize in conducting high-risk rescue missions.

Once at the location, the rescue personnel hoisted the individual into the helicopter and flew him to Providence Hospital where he was released to medical personnel in stable condition.

For this mission, the 210th and 212th Rescue Squadrons were awarded with one save.