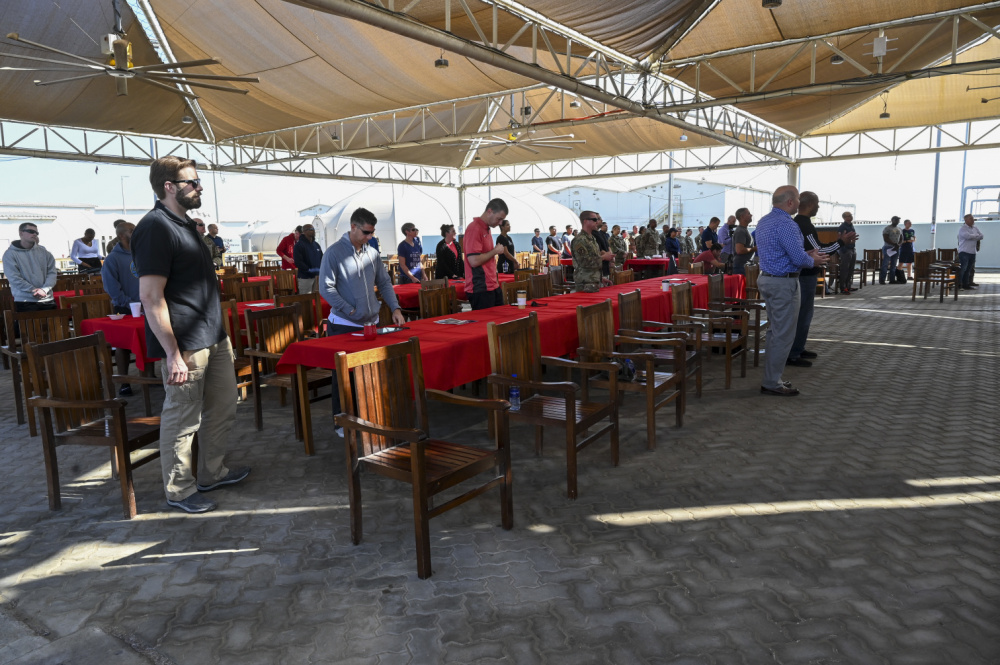 JANUARY 18, 2021 – “The ultimate measure of a man is not where he stands in moments of comfort and convenience, but where he stands at times of challenge and controversy.” – Dr. Martin Luther King, Jr.

As a nation, Americans take Martin Luther King, Jr. Day to pause and reflect on an important figure who spoke out and changed the world as a whole. Dr. King had a vision that changed history and forever transformed the future of generations to come. The 380th Air Expeditionary Wing chaplain corps held a unity service and luncheon Jan. 17 to honor and reflect on the legacy of Dr. King.

“When we think of Al Dhafra Air Base, I want us to think of a community,” said Lt. Col. Joshua Payne, 380th AEW chaplain. “We have that sense of community, a unified community. We may be from different branches, but we are one here. May we remember him and the movement and those who sacrificed their life who said ‘we must do better.’”

“I was chosen [to speak] and it confirmed in my spirit that I’m where I’m supposed to be,” said Hill. “It gives me an opportunity to really look intrinsically at myself first. And on MLK Day, what he did… it gives me opportunity to have hope and optimism for our future.”

“Seeing people who look like me in positions of authority is truly inspiring,” said Hill. “We always hear talk about integrating more minorities and women into our officer and leadership tiers and making sure we have those people who can fill the slots. It’s going to be the next generation up who are going to be given those opportunities, but we are slowly seeing that today at our higher levels of leadership. When I see people like that it is very encouraging because there was a day when you did not see that. You didn’t see black, you didn’t see female.”

Dr. King inspired millions to stand up and speak against the violence and discrimination that took place against minorities. Although it has been more than 50 years since his passing, his vision of equality for all is still being worked toward today by the united, enduring efforts of those who share his dream.

“Dr. King’s vision and the power of the civil rights movement had people from all different walks of life saying ‘we can do and we must do better,’” said Payne. “In our nation we don’t fear change, we fear loss and we are fearing that we’re losing something. Let us take back our focus and take the hopes of generations before us to bring us closer to life, liberty and the pursuit of happiness.”