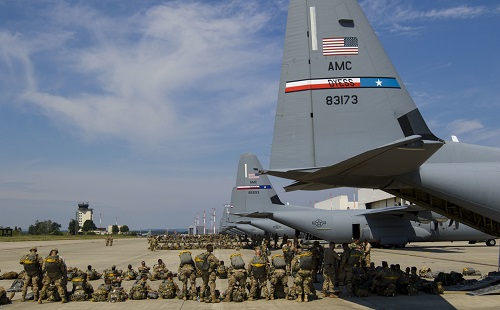 JULY 8, 2016, RHINE ORDNANCE BARRACKS, Germany – The planning and preparation for an multinational exercise, more than 500 paratroopers and an airborne operation into a foreign country began months in advance.

For the airborne operation, parachute riggers with the 11th Quartermaster Company, 82nd ADSB, began packing thousands of parachutes months before execution of exercise.

“It was interesting to work with the British,” said Pvt. William Webb, a rigger assigned to the 11th Quartermaster Company. “They asked me questions about our [parachutes] as we rigged them up because we are the ones using T-11 parachutes.”

United Kingdom paratroopers used T-11 parachutes for the jump into a Poland drop zone during phase I.

Before the 82nd Airborne Division paratroopers could begin the training, the 82nd ADSB coordinated access and custom clearances at all the training locations. After clearing the paratroopers, the next coordination was for transportation between and around the area of operations.

Once the training scenario at the drop zone was completed, all the paratroopers needed transportation to Ramstein Air Base to prepare the next phase.

“Movement around and between the locations was critical for mission success,” said Sgt. 1st Class Anthony Gatewood, the 82nd ADSB noncommissioned officer in charge of Rhine Ordnance Barracks for the exercise. “We made sure there was enough transportation assistance requested for all forces at Hohenfels Training Area, Grafenwoehr Training Area, RAB, ROB and the drop zone in Poland.”

The Phase II jump consisted of more than 1,000 paratroopers from the 82nd Airborne Division and allied partners jumping into Hohenfels Training Area and conducting a second training scenario.

This exercise marks the first international training operation the 82nd ADSB has participated in since rejoining the division in May 2015.

“As the sustainment element of the 82nd, we are postured to support the 82nd Airborne Division and Global Response Force no matter where they are,” said Gatewood. “This exercise tested our capability to provide all necessities for the GRF to function smoothly.”

One vital mission for supporting the multinational task force is setting up living and work areas for the paratroopers.

“After surveying the area at ROB, we saw the need for extra sleep space, so we set up two recreational tents that housed approximately 500 82nd Abn. Div. and Italian paratroopers,” said Gatewood. “Soldiers require food to produce energy, so we set up a third tent for a dining facility capable of feeding 450 people at once.”

As the 82nd ADSB continued to set up living and work areas, they were also receiving and processing more than 1,200 82nd Airborne Division paratroopers.

As paratroopers conducted training, the sustainment brigade worked through whatever challenges arose as the exercise progressed.

“For what we were asked to provide, we overcame whatever challenges arose effectively and proficiently,” said Gatewood. “We all have different viewpoints, but we worked through everything to provide a coordinated effort across the exercise.”

As the teams worked behind the scenes, paratroopers like Webb could continue to focus on providing support to those who participated in the jumps.