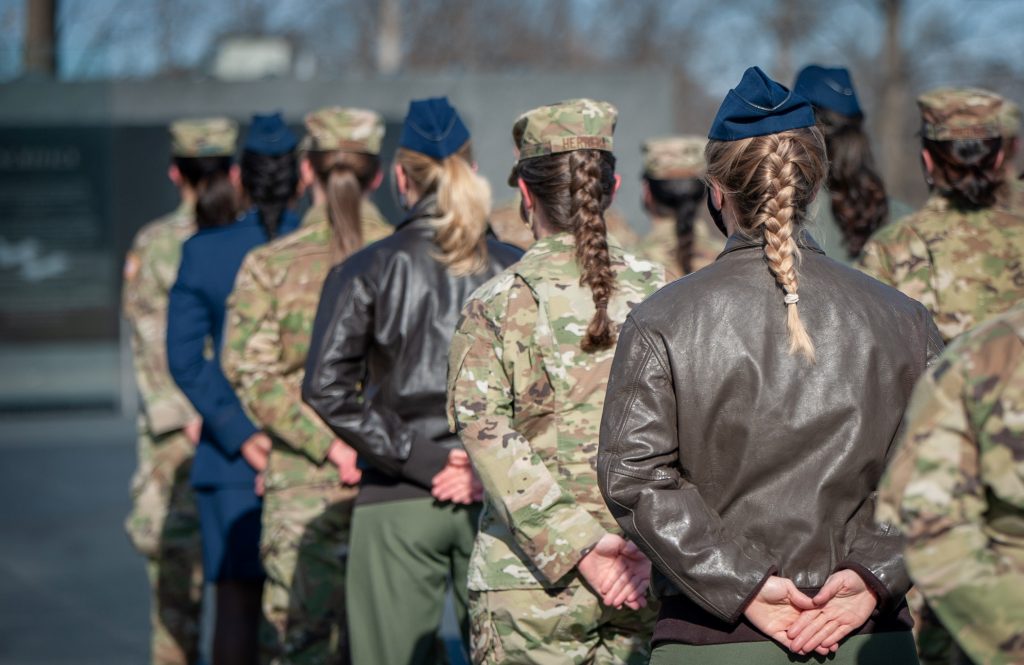 “Our goal is to remove barriers so that it is easier for women to continue serving in our Air Force,” said Lt. Col. Jeanette Anderson, perinatal nursing consultant to the U.S. Air Force Surgeon General. “If we can provide the support they need from a health perspective, then we can ensure they are able to stay in the Air Force and are medically ready.”

According to Maj. Emily Yates, a WIT co-lead and health care integrator with the 633rd Medical Group at Joint Base Langley-Eustis, her team’s work is crucial to retention.

“We have discovered that one of the reasons women leave the Air Force has been tied to medical barriers,” Yates said. “Through our health-focused line of effort, we are working on strengthening a health care system that meets our Airmen’s needs.”

In the past year, the WIT’s Female-Specialized Health Care Programs have driven several policy changes. In February, hair standard policies were changed based on feedback received from Airmen who identified numerous health concerns around the bun.

“The WIT conducted polling, interviews and other grassroots data and we found that women were experiencing headaches, hairline cysts and hair loss as a result of hair policies,” said Master Sgt. Johnathon Lind, Department of the Air Force Barrier Analysis Working Group for the WIT. “We also learned from Veterans Affairs that 40% of hair issues came from women, but women only make up 20% of the force. We knew we had to update our policies surrounding hair.

“It was through the WIT that we were able to gain the support from other Air Force entities, major commands and wing leadership. We briefed Air Force Chief of Staff Gen. CQ Brown, Jr., and Chief Master Sergeant of the Air Force Joanne S. Bass on the proposed changes.”

Another completed initiative pushed by this team is lactation accommodation for Air Force service members and civilian employees.

“Finalized this summer, this policy change allows those who return to work, after giving birth, the appropriate accommodations to express milk while they are at work so they can both feed their baby and maintain their health,” Anderson said.

The U.S. Air Force also updated its convalescent leave policy for Airmen and Guardians who experience a miscarriage or stillbirth, allowing them the time to heal and recover.

With this policy update, as outlined in Air Force Manual 41-210, there will be standardized convalescent leave, distinct from parental leave policies, for service members who experience perinatal loss. This change provides a critical update to support women who do not qualify for parental leave.

“Prior to this, women would only be eligible for parental leave if they had a qualifying birth event, meaning they delivered a baby and took that baby home with them,” said Lt. Col. Larissa Weir, chief women’s health consultant to the Air Force Surgeon General. “But for women who experienced a loss, we were seeing significant variation in the duration of leave they received. We put together this update to standardize that leave based upon how far along in the pregnancy they were.”

Specifically, this policy grants up to 42 days of leave based on the woman’s gestational age and any additional medical provider recommendations. The policy also includes Airmen and Guardians who decide to place their baby for adoption immediately following birth.

The WIT is entirely made up of volunteers ranging in ranks and backgrounds who are driven to create necessary policy changes that remove barriers to service. For Lind, women’s health issues is not a women’s-only issue and should be something in which the entire Air Force should be involved.

“The WIT isn’t just for women and I am trying to be an example of that,” Lind said. “Any issue they are experiencing is also my issue. That’s what drives me to be a part of this team. When you are a minority population within a group, it can be tough to make necessary changes, so it is important we bring the whole team together to solve these problems.”

For individuals interested in joining the WIT, more information can be found on the common-access-card-enabled WIT’s Air Force Portal page.