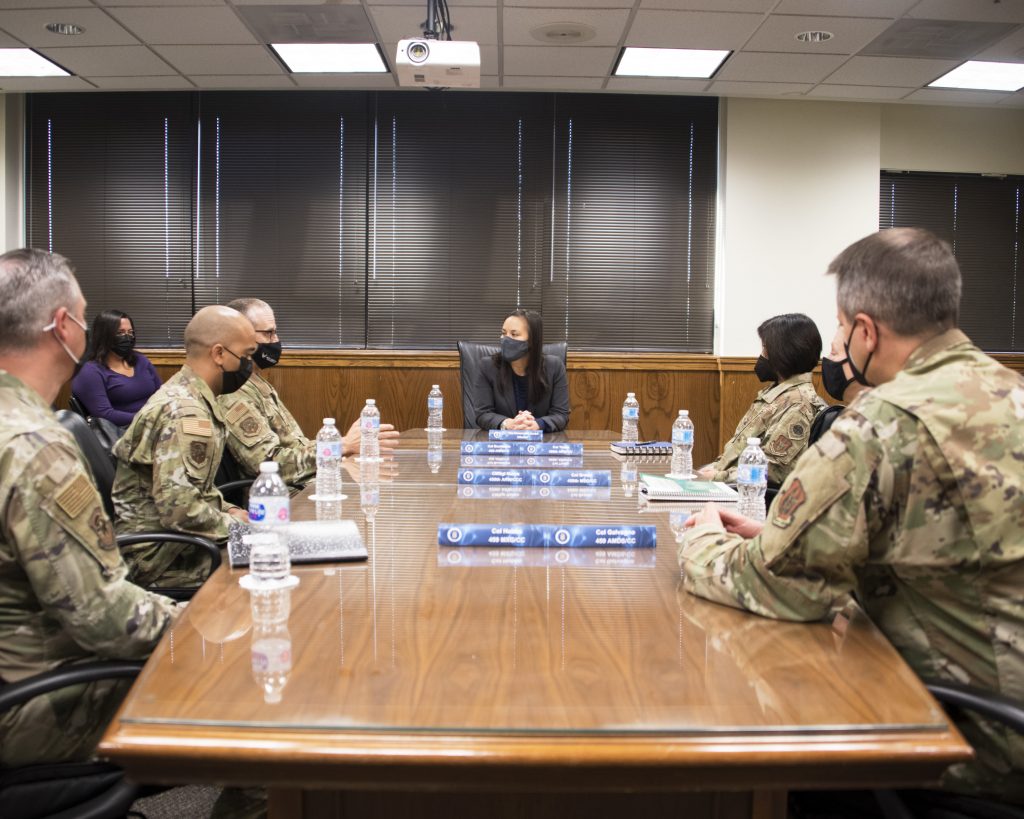 “The secretary planned on directing the services to be aggressive and ambitious in how we do this, and so that’s exactly what we did,” Jones said. “And we spoke with SG (Surgeon General) in terms of supply of the vaccine available, and they said they could support this timeline, so we’ve got to move out.”

The under secretary’s purpose for the short trip to JB Andrews was to meet with the AFR and have an open, face-to-face discussion on the mandatory COVID vaccination efforts and learn what the Reserve needs at the secretary level to make this initiative successful. This was also a rare opportunity for the Airmen to discuss their concerns and seek answers from the under secretary.

“Trust is a big factor,” said Chief Master Sgt. Adam Willemssen, 459th Aeromedical Evacuation Squadron superintendent. “I like the way that the wing, locally, rolled it out. I guess it is a directive, but one way to get through that trust period is to influence rather than direct. And the verbiage and the way it’s being presented is going to help a lot of those folks.”

Trust is certainly a factor for many, and time constraints present a hill to climb as well.

Many Reservists are only at their unit one weekend a month and are not available at a moment’s notice. “We technically only have September, October, November UTAs (Unit Training Assembly) to prepare—so that’s a total of six days to get all of this done,” Autry said.

“It is a lot to share in a protracted amount of time,” said Lt. Col. Miriam Carter, 459th Force Support Squadron commander. “It’s a little bit of a LIMFAC (limiting factor), but we’re working through it.”

Though it’s a lot to do in what is an understood (within the Reserve) smaller time frame for Reservists, the wing is moving ahead.

Upon the mandate, wing leadership began to inform its members about the need for vaccination via email distribution, video messaging, social media and face-to-face communication. The wing was previously more than 60% vaccinated as a result of previous individual and wing vaccination efforts, and it began mass vaccination of its members the first training weekend after the mandate was announced in order to meet the December deadline.

The wing’s leadership also made it clear it is here to help by immediately providing educational resources via the chaplain and legal offices, and even through its medical squadrons. And for those who sought exemptions, assistance was provided to help ensure they have all of the information to proceed expeditiously.

Jones is encouraged by the efforts of this Reserve wing. She said this initiative is important to the Air Force mission, and that Secretary Kendall is taking this effort very seriously. Air Force leadership not only expects local vaccination efforts to keep the mission going, but they also hope it will save lives.

Accordingly, some Reservists view the vaccine and the vaccination efforts as a vital element of our public and personal health, and our national defense. “This is a readiness issue,” said Maj. Kristen George, 459th Aeromedical Evacuation Squadron. “And for evacuation (squadron), we want to make sure we’re ready to go in 72 hours. And just like the flu shot, smallpox, and anthrax—all the things we’ve normalized in the past—we need to normalize this vaccine.”

The DoD-wide vaccination mandate was implemented soon after the Pfizer vaccine was approved by the U.S. Food and Drug Administration this summer. Thus, Pfizer is the vaccine offered by the Air Force. However, Airmen can still choose to take a different vaccine offered by off-base providers.

One Reservist said the mandate was necessary for some Airmen to move forward with vaccination. He said many were waiting for a directive before they would consider a vaccine.

“A lot of folks wanted that word that we have to do this,” said Chief Master Sgt. Michael Payne, 459th Aircraft Maintenance Squadron. He said they will do it because it is required.

Wing leaders like Maj. Thomas Lowe, 459th Security Forces Squadron commander, hopes each Airman will understand why they matter in this effort.

“In terms of what it is we’re doing right now, it’s no different than any other vaccine we take,” Lowe said. “You’re a professional first and this is a requirement. So, if you want to continue, then I’m here to support you. Because you are important to me, we can keep moving forward with that.”

In the end, understanding is the key for many Airmen. The Reserve continues its efforts to inform and educate its members. And will continue to do so after the December deadline.