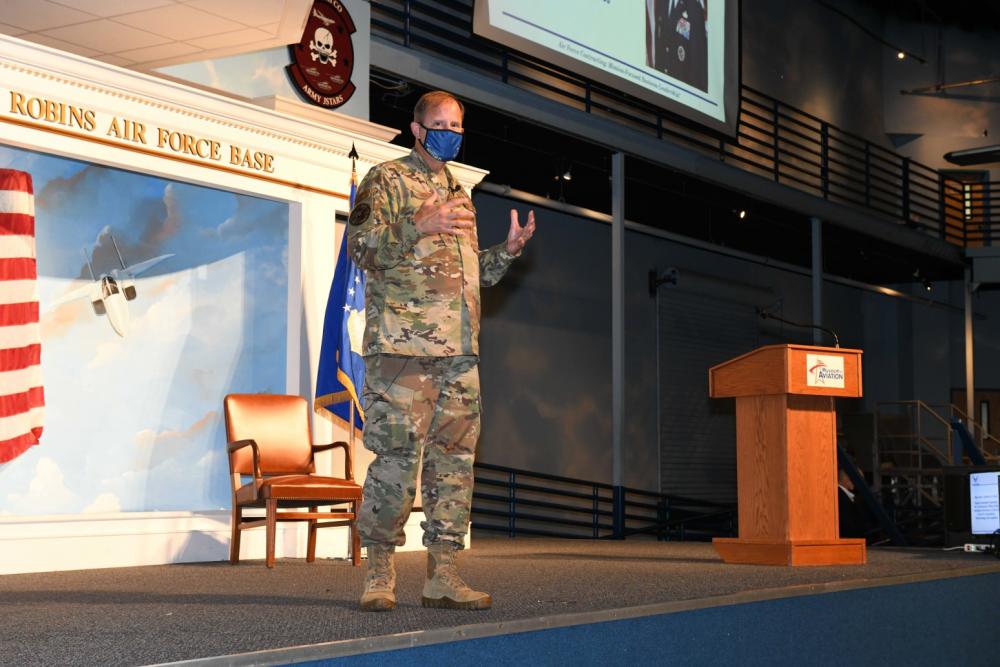 SEPTEMBER 1, 2021 – The Air Force is making it easier for installation government purchase card-holders to do business with local communities by introducing the First Look Program.

The First Look Program is a wing commander-driven initiative for employing purchasing power to GPC users and will allow wings throughout the Air Force to align their micro-purchase spending with the Secretary of the Air Force’s vision for smarter business practices.

“You, as GPC holders, are on the vanguard of something big across the whole Department of the Air Force,” he said. “And I will tell you, Team Robins is a leader in getting out to the local community to make sure everyone knows about this, and everybody can start doing it and benefiting from it.”

Previously, as a Columbus Air Force Base, Mississippi, contracting squadron commander, Holt learned from the Chamber of Commerce that it could be difficult to do business with and installation.

“What I decided at Columbus AFB was we were going to fix that,” he said. “We did a reverse vendor fair. Instead of the local community businesses coming out and providing their information, we had all the requirement organizations on base come and set up information booths.

“The organizations would provide information on their annual spending requirements,” he continued. “So they would actually get to meet us, and we could reconnect and build relationships with the local community.”

“They would come to sign up for the First Look Program, and we would put their web site on the base intranet page,” he said. “We then trained up all of our GPC holders and said this is your first look before you go to the internet to buy something.”

Holt said we have the authority to do that, and it’s the right thing to do.

“We are not telling you that you have to buy from here, but we want you to look here first,” he said, “Because we want to support our local communities and the jobs right outside our gates before we look elsewhere.”

Holt said when he stepped in to his current role, he wanted the First Look Program made available Air Force wide.

“When I became the deputy assistant secretary for Contracting, my team and I got together, and we figured out that we are going to do this,” he said.

Michael Hogan, Headquarters Air Force deputy assistant secretary for contracting sourcing and transformation chief, said the First Look Program is going to use the 26,000 Air Force GPC holders as a tipping point in bringing the $1.8 billion back into local communities around Air Force installations.

“Through partnerships we have found 107,000 businesses,” he said. “That’s a huge engine to be able to drive opportunities to those local small businesses.”

“We are being able to give some of those vendors that can’t afford the e-commerce game a way to do that at no cost to them and to give them the opportunity to be discovered Air Force wide,” he said.

The underserved communities will have opportunities too, Hogan added.

“The National Diversity Veteran Small Business will focus on some of our local small businesses and our veteran owned-businesses and will reinvest that into our local economies,” he said.

These are massive e-commerce engines that will help create that tipping point, Hogan said.

“We want to do business with the local small businesses,” he said. “Things like this and the industry days are vital to break down some of those barriers and complexities in doing business with the Air Force.”

Holt said the First Look Program is going to put a giant magnifying glass over the local communities.

Story was originally posted to the Robins Air Force Base web site Aug. 31, 2021 and may be found at https://www.robins.af.mil/News/Article-Display/Article/2760280/afsc-contracting-host-air-force-first-look-program-workshop/