OCTOBER 23, 2020 – The Air Force Civil Engineer Center’s Readiness Directorate made its first delivery of the new medium-size explosive ordnance disposal robot to the field Oct. 15, to Tyndall Air Force Base.

“Much like iPhones and laptops, this technology moves at such a rapid speed; the difference in capabilities between the MTRS II and the AFMSR are significant,” he said. “The MTRS II controller is comparable to an Xbox or PlayStation-style controller – something the younger generation can pick up and immediately use with ease.”

While the AFMSR technology was already outdated, the need to replace it became more dire after Hurricane Michael destroyed all robots in the repair facility at Tyndall AFB in October 2018. With support from the Air Force Installation and Mission Support Center, AFCEC was able to develop and field the new system in less than two years.

“Over the next 16-18 months, every EOD flight can expect to receive 3-5 new robots and an Operational New Equipment Training course,” Frewin said.

Among the first group to complete the 16-hour-long OPNET course was 325th CES’s Senior Airman Kaelob King, who said the user-friendly nature of the new system greatly enhances EOD capabilities.

“The new camera is much more efficient,” King said. “Our last camera was like looking through a fuzzy screen versus this one with multiple cameras up to 1080p with optical and digital zoom.”

In addition to improved optics, King is also pleased with the adaptability and flexibility of the new system.

“Being able to update or rewrite the software means the Air Force can easily expand our capabilities down the road by adding tools, sensors and other attachments, whereas the old model required hardware updates,” King said. “In our field, having a flexible, autonomous robot is a really good thing.”

“The biggest thing these new robots provide for CE is an enhanced force protection capability to protect people and resources from explosive-related incidents, enable air superiority and quickly resume airbase mission activities,” the chief said. “The cameras, the controls, the communication systems – we’re able to get a lot more into a smaller package and we’re able to be safer and more efficient.”

In addition to the $43 million MTRS II acquisition, AFCEC also plans to complete a large robot acquisition in the coming months to replace the aging Remotec F6A. 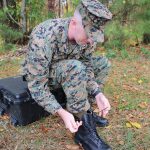