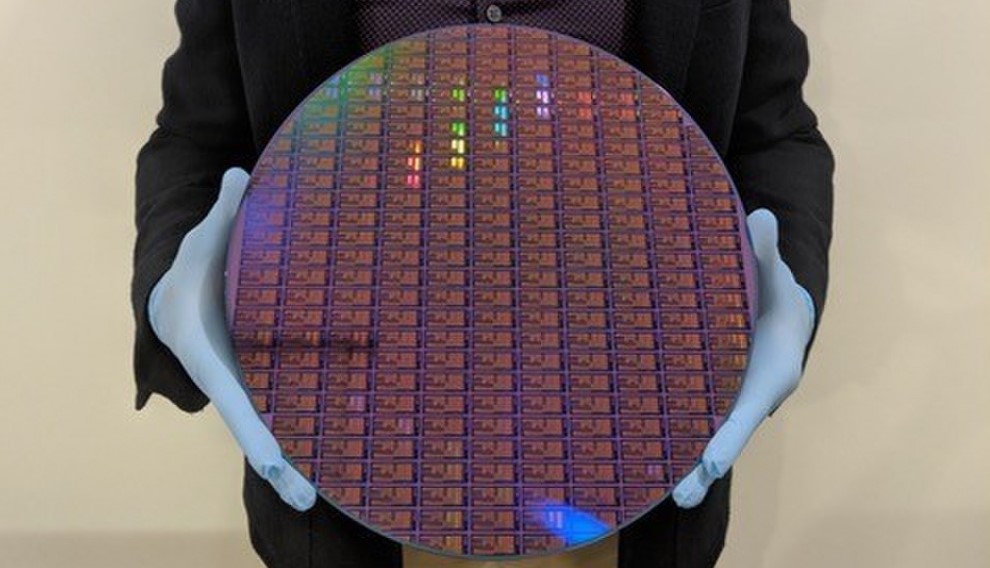 APRIL 6, 2021 – The Air Force Research Laboratory recently approved a Cooperative Research and Development Agreement between its Nanoelectronic Materials Branch and Iris Light Technologies. The collaboration will be working to develop hybrid silicon lasers. Sometimes called the “holy grail of optoelectronics,” these miniature lasers are part of a broader field of technology known as silicon photonics.

Silicon is perhaps most familiar for its role in semiconductor diodes — important components in the circuitry of nearly everything electronic that depends on microchip technology. Because of its atomic structure, silicon can be made to either conduct electricity or to block it. Its ability to control current flow is achieved by adding a small amount of another element, such as boron or phosphorus, to silicon’s crystal lattice. As with nearly all electrical components, passing current through such “doped” silicon devices in a circuit always produces heat, but little light, limiting its use for LEDs or lasers.

Recently, some limited success in getting a silicon chip to emit a significant amount of light has been achieved by alloying silicon with germanium. The process is somewhat tedious, however, and germanium is expensive. An “easier” process using less expensive materials has remained elusive.

AFRL research scientist Dr. Steven Mckeown is part of a team that is investigating silicon photonics with a goal of finding a better way to fabricate hybrid devices that make possible the integration of lasers onto silicon chips. “The problem is that silicon has poor optical gain, gain being how we get ‘lasing,’” he said.

Part of the goal is to find a less expensive and more reliable way to manufacture the “on-chip lasers,” as well as a way to enable their mass-production. One method AFRL is investigating involves a type of “photonic ink” developed by Iris Light Technologies, AFRL’s partner in the CRADA.

According to its website, Iris can use this photonic ink to print laser gain material directly onto passive silicon chips. Iris aims to modify the ink so that it will emit light when it is pumped by electric current. The ink is capable of emitting light over a broad spectrum, from visible to the near infrared.

“The novelty with this technology,” said McKeown, “is that we are taking a plain silicon chip, which is easy to make, with no gain on it, and no light sources. During the processing of the chip, an ink material is printed onto the chip.

“The ink will be what converts the energy into the laser light,” said McKeown. “The thing that actually kind of shapes the light and carries it and guides it is the silicon. It interacts with the ink in that it converts energy into laser emission.”

Such “nano-material lasers” would have many practical applications. One would be in the circuitry of computers. Today’s data processing speed is limited by resistance to the flow of electrons in the copper lines of the computer’s circuitry. This resistance produces heat. Using light, or photons, instead of electrons means less resistance and less heat, which in turn means faster data processing.

“This is especially relevant for data processing centers that use insane amounts of power,” said McKeown. “Interconnects now use pluggable transceivers to put data onto an optical fiber to move from rack to rack. The more tightly we can integrate all these pieces, the closer they get and the shorter the wires we need — all of which increase speed and lower power consumption. The best case is a silicon photonic chip complete with a laser and the CMOS circuitry all in one.”

Other applications of special interest to AFRL are hyperspectral sensing, Light Detection and Ranging (LIDAR), and radio frequency (RF) photonics.

Hyperspectral sensing is a technique where an image is analyzed across many bands of the electromagnetic spectrum at once, rather than assigning only a single color to a pixel.

“Think of it like taking a picture with many different filters so you can see exactly how much of each color — even invisible colors like infrared or UV — it has,” said McKeown.

“A normal image is broken down into red/green/blue ‘bands’ (the ‘RGB’ value, for instance),” said McKeown. “A typical camera has three different sensors, one for each color band. Multi-spectral is maybe red/yellow/green/blue/orange/purple.”

“Hyper-spectral,” he added, “means we break ‘red’ down into many bands, maybe 10 to 100. But we also do this for other colors, all at the same time. In a normal image two things that look the same color of red may have different spectral content at that resolution.”

This kind of capability has many uses. For example, it can produce satellite imagery of Earth’s surface for identifying minerals in a rock formation or monitoring the condition of crops or forests. In medical imaging, it can help doctors identify diseased tissue in the early stages of an illness.

LIDAR, which uses a laser beam to measure distance, is used for a multitude of applications, from mapping to providing guidance systems for self-driving cars.

RF photonics deals with radio frequencies, which are generally analog signals —meaning they vary over time. Such analog signals can be converted to digital signals, that is, a series of zeros and ones. In translating analog to digital, however, a lot of information can be lost.

McKeown explains further that “RF photonics” doesn’t mean just dealing with analog signals. “It means we’re using photonics (hundreds of terahertz on the electromagnetic spectrum) to convey radio frequency (tens of gigahertz) information,” he said. “These high frequencies are very difficult to transmit as electrical signals because of losses, especially at long distances. If we encode them on a laser, we take a conversion penalty, but we get rid of that problem.

“There are also advantages for certain types of signal processing when done in the optical domain,” he continued. “Digitizing high frequency radio signals is difficult and produces a lot of data, and analog electrical components can be bulky.”

McKeown explained that a lot of the current technology is big and bulky because it has so many components. However, on-chip laser technology will allow reducing the size of the complete functioning apparatus to “about the size of a quarter.” It is also less expensive than current technology. “Integration,” he said, “eliminates the packaging and all the labor to manufacture the various parts.”

McKeown went on to state that getting lasers on a silicon platform is a very known, active problem. “So, researchers are looking at everything, and not every solution may apply to every problem. We may end up with a toolkit that has several solutions, or we may end up with one solution for all problems.”

With the CRADA, Iris will provide AFRL with a set of test chips.

“Our lab has the capability for measuring line width of the lasers,” said McKeown, “as well as wavelength and different metrics to use to characterize them. Then we will provide feedback to the researchers at Iris so they know what to do to improve their design.

“The advantage of the CRADA is we can get a feel for this type of technology and see how it works and what it’s good for.”

The Air Force Research Laboratory is the primary scientific research and development center for the Air Force and the Space Force. AFRL plays an integral role in leading the discovery, development and integration of affordable warfighting technologies for our air, space and cyberspace force. With a workforce of more than 11,000 across nine technology areas and 40 other operations across the globe, AFRL provides a diverse portfolio of science and technology ranging from fundamental to advanced research and technology development. For more information, visit: www.afresearchlab.com.