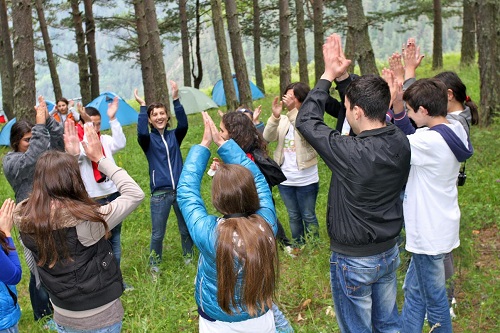 MARCH 22, 2016, JOINT BASE SAN ANTONIO-LACKLAND, Texas (AFNS) – Teenagers looking to cure those summertime blues will have various camps to choose from this year, thanks to central funding from the Air Force Services Activity, also known as AFSVA.

The camp is offered June 17-24. Youth entering their sophomore or junior year of high school in fall 2016 can apply to attend the Teen Aviation Camp at the U.S. Air Force Academy in Colorado Springs, Colorado.

This isn’t your ordinary summer camp, said Kevin Hansen, youth specialist for AFSVA. Several camp attendees have gone on to attend the Air Force academy, other service academies or pursued ROTC in college.

“It’s extremely competitive,” Hansen said of the camp. “There are 36 spaces available, and on average 150 youth apply.”

During the application process, academics and extracurricular activities are evaluated. Once accepted, Hansen said, attendees experience a week in the life of a cadet, from sleeping in prep dorms to briefings on the workload and expectations. There are also rigorous physical training elements, such as a high and low ropes course challenge.

But it’s not all work and no play at the camp, Hansen said. There are exciting elements, such as a whitewater rafting trip, a tour of the U.S. Olympic Training Center, and even flying in a Cessna with an instructor.

The deadline to submit an application is April 22. Selections will be announced May 6.

For youth who want to explore the final frontier, Space Camp at the U.S. Space and Rocket Center in Huntsville, Alabama, might whet their appetite.

A common theme throughout the camp is the application of science, technology, engineering and math, or STEM principles, especially in the Robotics Academy and Aviation Challenge.

There are 80 positions available. The deadline to submit an application is April 22. Selections will be announced May 20.

Youth interested in becoming tomorrow’s leaders can decide to attend one of two leadership summits: the Classic Summit in Dahlonega, Georgia, from July 17-22; or the Adventure Summit in Estes Park, Colorado, from Aug. 9-14.

Each summit can accommodate up to 120 youth, said Penny Dale, from the 4-H/Air Force Partnership at Texas A&M University.

In addition to developing youth leadership skills, Dale said specialized activities are offered to the youth.

“In Georgia, the focus is on environmental sciences and ecosystems,” she said. “Activities stay within the camp. They even have sessions in herpetology and panning for gold.”

At the end of the camps, Dale said, a distinguished VIP speaks to the campers. Last year, Air Force Reserve Lt. Gen. James F. Jackson spoke to the campers.

Interested teens of AFR and ANG parents can go online and apply here. The deadline for application is May 1, with selections announced June 1.