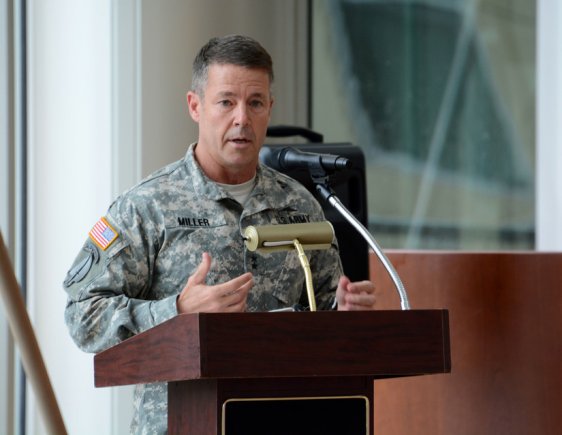 JUNE 21, 2018, Washington D.C. – The nominee to be the next commander of the Resolute Support Mission and U.S. forces in Afghanistan emphasized to the Senate Armed Services Committee Tuesday that the mission in Afghanistan is necessary to protect Americans from terror attacks in the homeland.

“I’ve learned a lot in the past 17 years,” Miller told the committee. “I’ve learned there are groups that want nothing more than to harm Americans. I’ve learned these groups thrive in ungoverned spaces. And I’ve also learned when we maintain pressure on them abroad, they struggle to organize and build the means to attack us. I understand our core goal in Afghanistan is to ensure terrorists can never again use the country as a safe haven to threaten the United States or other members of the international community.”

Miller also emphasized that the battle in Afghanistan cannot be won through military victories: it must be backed up by diplomacy with neighboring countries, political agreements inside Afghanistan and economic development.

AFGHANISTAN RESPONSIBILITIES
His job in Afghanistan will be twofold: to oversee the NATO train, advise and assist mission for Afghan forces and to handle the counterterrorism effort in the nation. There are about 16,000 American service members based in Afghanistan as part of President Donald J. Trump’s South Asia strategy.

The military portion is necessary to provide the space and security for other aspects of the South Asia strategy, Miller said.

“I’ve had the honor of spending more than 20 years of my career in Special Operations,” he said. “I know the value of reliable partners. I’ve learned problems are best addressed by seeking insights and advice from a wide pool of talent — not just those in uniform, but those throughout our government and our international partners.”

Miller told the senators that he wants to make a more thorough study of the country. Still, he said, “My instincts say [the number of troops is] about right, but if confirmed I would like to go over and get a better assessment of that.”

Miller stressed the importance of neighboring Pakistan. “We should have high expectations that they are part of the solution — not just diplomatically, but from a security standpoint as well,” he said.

Miller graduated from the U.S. Military Academy in 1983 and was commissioned into the Infantry. He has served in various Infantry and Special Operations units and his deployments include Somalia, the Balkans, Iraq and Afghanistan.