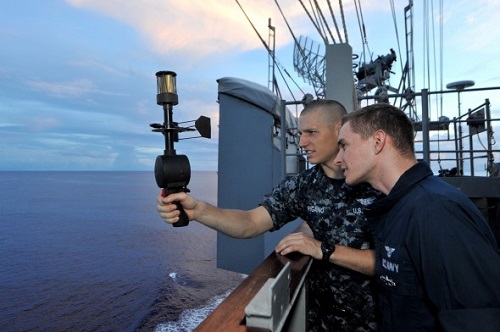 MARCH 16, 2016, ICE CAMP SARGO, Arctic Ocean (NNS) – As part of the expanding mission of the Navy’s Ice Exercise (ICEX) 2016, Aerographer’s Mates from Fleet Weather Center in Norfolk, Va. are attempting to forecast weather from the Arctic Circle for the first time.

Aerographer’s Mate 2nd Class Zachary Yanez, of La Habra, Calif., and Aerographer’s Mate 1st Class Daryl Meer, of Hauppauge, N.Y. are bringing their 16 years of combined experience to ICEX 2016 to dramatically improve Navy observing and forecasting in an ever changing arctic environment by being stationed on the ice. Both Sailors are assigned to Fleet Weather Center Norfolk, part of the Naval Meteorology and Oceanography Command.

“The extreme weather patterns within a data sparse region make this a very challenging and learning opportunity,” said Yanez. “I am excited to be one of the few Aerographer’s Mate that gets the opportunity to tackle this experiment and contribute to the further understanding of this ever changing region.”

“The Navy seeks to increase its expertise in this region,” said Rear Adm. Timothy Gallaudet, oceanographer and navigator of the Navy and commander, Naval Meteorology and Oceanography Command. “We need to understand and predict the harsh physical conditions that fundamentally constrain any operation here.”

Gallaudet also had the opportunity to visit the ice station and personally observe the Aerographer’s Mate’s work in the Arctic.

“It is also great to see first hand the revolutionary work our Sailors are conducting in support of ICEX,” said Gallaudet.

Working alongside interagency and international partners, the Navy’s science and research programs are studying the Arctic to improve sea ice, weather and ocean current forecasting.

“Since the beginning of ICEX, we have had average temperatures of -14 degrees Fahrenheit with wind chills reaching down to -46 degrees,” said Meer. “Providing accurate weather forecasts is critically important to the safety of personnel and operations of Camp Sargo. These weather conditions can be deadly and extremely detrimental to operations if not properly understood.”

ICEX 2016 is a five-week exercise designed to assess the operational readiness of the submarine force while also continuing advancing scientific research in the arctic region. The Navy’s Arctic Submarine Laboratory, based in San Diego, serves as the lead organization for coordinating, planning and executing the exercise involving two submarines, multiple nations and more than 200 participants.