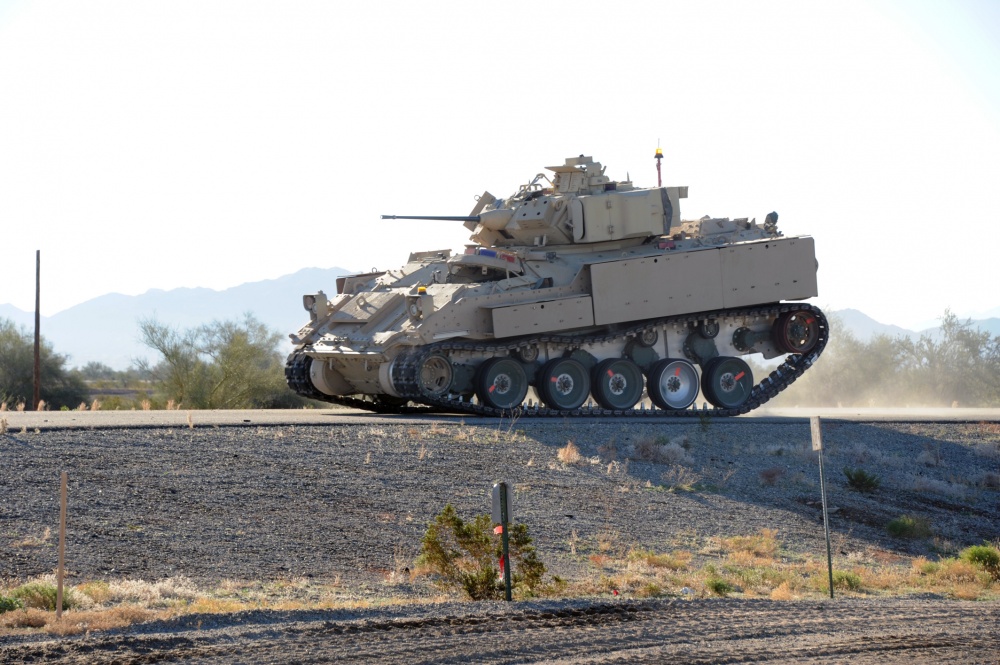 MARCH 26, 2020 – By now, it is widely known that U.S. Army Yuma Proving Ground is at the forefront of testing for the Army’s top modernization priority, long-range precision fires.

In supporting most of the Army Futures Command’s cross-functional teams, however, YPG has also been a vital element in testing for the Army’s next priority, the Next-Generation Combat Vehicle (NGCV).

Since last May, YPG has been testing the Ground Vehicle Systems Centers (GVSC’s) Advanced Running Gear (ARG) for potential use on the future NGCV Operationally Manned Fighting Vehicle (OMFV). The ARG system is using an existing Bradley Fighting Vehicle as a surrogate test platform. A robust suspension system is vital for a vehicle that tips the scales at more than 40 tons, and YPG has unparalleled test expertise and hundreds of miles of road courses of various degrees of ruggedness that closely simulates what a Soldier might experience in theater. The novel track and suspension system has already yielded vital insights in evaluations done here.

“We’re doing a proof of concept test for the road arms, road wheels, and track tensioner for the vehicle,” said Jade Janis, test officer. “The intent is to improve the ride quality and durability.”

The new running gear also provides more ground clearance and increased transportability and survivability, boasting an adjustable ride height that makes it easier to load on a trailer or navigate beneath bridges or other low-hanging obstructions. It also has a wider track than the currently fielded Bradley, AMPV and PIM platforms.

During performance testing, the evaluators collect roughly 100 channels of data, including the displacement and temperature of each road arm as they are put through their paces. The testers monitor if the system deteriorates through use, and try to discern a trend that will help estimate the normal rate of deterioration. As it runs, the exact location and terrain conditions of any possible anomaly can be identified.

“If you have a failure, you can narrow down which part of the course and when the incident occurred,” said Janis. “All of the road courses we have are characterized with a laser.”

With performance testing nearing completion, next on tap is multiple months of endurance testing in which the running gear will be subjected to use across thousands of road miles of YPG’s rugged terrain. By running simulated missions across road courses featuring various conditions, from paved to gravel to punishing desert washboard that severely rattle vehicles, test-vehicle operators continually verify the running gear’s performance.

“There are a few target areas the suspension system is designed to improve on, one being ride quality to make sure the Soldiers aren’t negatively affected by driving across rough terrain for long distances,” said Janis. “Another thing is reducing maintenance times to be able to get the vehicle out in the field faster and keep it in the field longer.”