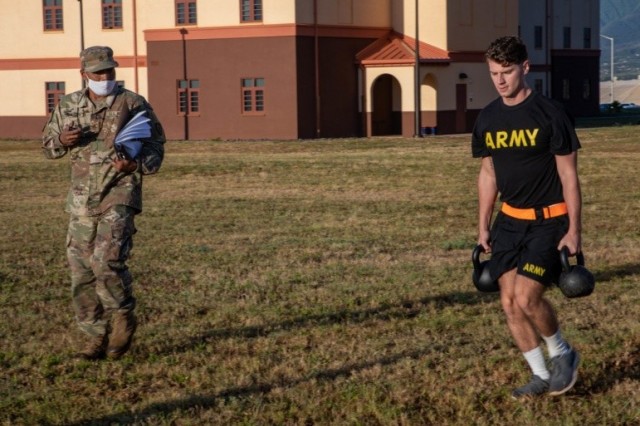 JUNE 16, 2020 – The Army Combat Fitness Test, or ACFT, will be the force’s test of record Oct. 1, but the Army’s top enlisted Soldier says troops will have more time to train for and pass the six-event test — without fear of it negatively impacting their careers during that time.

Despite hold ups caused by COVID-19, Sgt. Maj. of the Army Michael A. Grinston is confident the long-planned ACFT will stay on track. In addition to the new training timeline, he also announced a handful of other modifications to the test, dubbing it ACFT 2.0.

It’s the same six-event physical fitness test — just an updated version, Grinston said. So even though troops don’t have to pass the test this year, they still have to take the ACFT as scheduled.

“When it’s the test of record, you have to put it into the system of record, and that’s the only requirement right now,” Grinston said. This means the Army won’t take administrative actions against Soldiers for potential ACFT failures.

Potential career impacts like separation, derogatory or referred evaluation reports, and a Soldier’s Order of Merit List standing are all off the table to be negatively impacted due to an ACFT failure.

This news comes as the Army, in response to social distancing guidelines, hit the brakes on all physical fitness tests in March. Although fitness tests slowed down, Army leaders went full-steam ahead to plan how Soldiers will jump from the 40-year-old Army Physical Fitness Test, or APFT, to the new ACFT 2.0.

So what are the changes?

First, for many, the APFT is gone for good. Once testing suspensions are lifted, the only Soldiers required to take an APFT ever again will be troops without a current passing score, the sergeant major confirmed.

“As for everyone else [with a current passing APFT score] — they should start training for the ACFT,” he added.

As far as the evolution of the ACFT, the biggest change for Soldiers is the option to substitute a two-minute plank, once a Soldier has attempted the leg tuck.

The plank is seen as a transitioning tool for Soldiers jumping from the APFT to the six ACFT events, said Maj. Gen. Lonnie G. Hibbard, the U.S. Army Center for Initial Military Training commanding general.

Depending on an individual’s physical starting point, switching back to the leg tuck should take “anywhere between six to three months,” Hibbard added, but for now, the plank is an alternative.

Planks are a core muscle-burning exercise, completed by individuals who remain static with their elbows planted to the ground directly beneath the shoulders at a 90-degree angle while maintaining a straight posture.

Plank exercises can be conducted almost anywhere, Hibbard said, and do not require equipment to train for. Under the current COVID-19 conditions, this could be an ideal transitional assessment.

Also, the stationary bike event dropped its initial 15,000-meter standard down to a 12,000-meter standard. Biking is an Alternate Assessment for Soldiers with permanent profiles unable to complete the two-mile run.

Additional changes for fiscal year 2021 also include scoring standards. All Soldiers are challenged to pass the ACFT at the “Gold Standard,” Hibbard confirmed, which is an overall minimum total score of 60.

To pass, all troops are required to meet the moderately challenging “gold standard” instead of the more grueling “grey or black” scoring minimums — typically reserved for harsher, more physically demanding career fields. This standard applies to all Soldiers, regardless of age or gender.

Until COVID-19 hit, “we were seeing vast improvements with the ACFT,” Grinston said, adding the changes to the ACFT promotes a better physical fitness standard that will mirror the physical demands of the Army, while also decreasing injuries and having more effective Soldiers within the ranks.