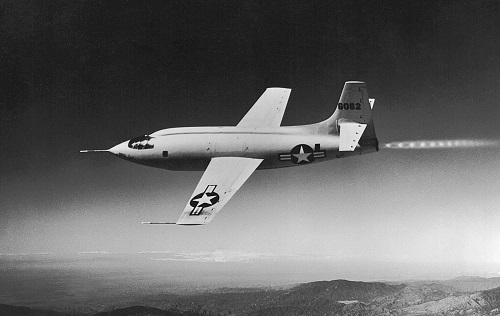 MAY 9, 2017, WASHINGTON (AFNS) – The Air Force has always been about speed. Less than one month after the Air Force became its own service 70 years ago in September 1947, Capt. Chuck Yeager became the first person to fly faster than the speed of sound – a barrier once considered impenetrable – in the Bell Aircraft X-1. On May 3, 2017, Air Force senior leaders met to consider options to accelerate hypersonics research and development to break even more speed barriers and ensure continued technological superiority.

Hypersonics refers to flying at five times the speed of sound, also known as “Mach 5,” or higher. From an Air Force perspective, it is a game-changing capability which can amplify many of the enduring attributes of airpower including speed, range, flexibility, and precision.

“We must push the boundaries of technology in every area,” said Air Force Chief of Staff Gen. David L. Goldfein. “Our adversaries aren’t standing still. They are looking for every advantage they can get.”

A recent Air Force Studies Board report identified that the U.S. is not alone in its quest for this increased speed. For example, China and Russia are already flight testing hypersonic weapons, and several other countries have shown interest in pursuing many of the underlying technologies for hypersonic flight.

“We have a real sense of urgency,” said Dr. Greg Zacharias, the Air Force chief scientist. “The acting secretary directed this discussion as a call to arms to maintain our heritage of excellence in this area.”

The discussions this week formulated a common understanding of the potential for hypersonics as a future operational game-changer for both the U.S. and its potential adversaries.

“We’re accelerating our research in this area,” said Acting Secretary of the Air Force Lisa S. Disbrow. “The benefits of this technology for our nation’s defense are wide ranging, from offensive capabilities to defensive systems. This is a high priority for the USAF.”

“We also laid the groundwork for a longer-term coordinated effort in policy, operational concepts, science and technology efforts, acquisition, and test and evaluation,” Zacharias said.

Foundational work for reaching an operational hypersonic capability has been long in the works. Over the years, the Air Force and other partners have researched a number of concepts to reach hypersonic speeds. One involved a “boost-glide” concept. This concept involves a ballistic launch to high speed with a subsequent unpowered glide flight path to the target. Another concept is an air-launch enabled vehicle propelled by its own rocket, ramjet, or scramjet.

According to NASA documents, more important than breaking speed records were the X-15’s “probing of hypersonic aerodynamic performance and heating rates, research into structural behavior during high heating and high flight loads, study of hypersonic stability and control during exit from and reentry of the atmosphere, and examination of pilot performance and physiology.”

Decades later, the X-51A program, a collaborative effort of the Air Force Research Laboratory and the Defense Advanced Research Projects Agency, represented one of the Air Force’s most significant reinvestments in hypersonic flight since the X-15 flights nearly 50 years earlier.

Launched from a B-52 Stratofortress bomber for the first time in May 2010, the experimental X-51A “Waverider” was an unmanned, autonomous supersonic combustion ramjet-powered hypersonic flight test demonstrator.

After extensive data analysis and lessons learned from three previous flights, the final flight of the X-51A on May 1, 2013, was the most successful in terms of meeting all the experiment objectives. The cruiser traveled more than 230 nautical miles in just over six minutes reaching a peak speed of Mach 5.1.

The AFRL also has extensive efforts underway in foundational hypersonic technology maturation, including work in ordnance, tactical boosters, airframe and structures, guidance, navigation, and control, and materials and manufacturing.

“We simply can’t get where we need to go without continued science and technology investment to bring these supporting technologies to a readiness level that can meet our timelines for an operational capability,” said Lt. Gen. Arnold Bunch, military deputy, Office of the Assistant Secretary of the Air Force for Acquisition.

The Air Force continues to partner with DARPA on flight demonstration programs for high-speed strike weapon technologies which address challenge areas such as air vehicle feasibility, effectiveness, and affordability.

We are advancing the development of critical technologies of an effective and affordable hypersonic cruise missile. This demonstration will build on the X-51 success and will include a tactically compliant engine start capability and launch from a relevant altitude. Additional programs aim to develop and demonstrate technologies to enable future air-launched, tactical-range hypersonic boost-glide systems.

“We’ve had great long-term relationships with industry on these efforts,” Bunch said. “The technology and concepts from these demonstrations will provide options for an operational weapon system for rapidly and effectively prosecuting the type of targets we know we’ll need to reach in highly contested environments.”