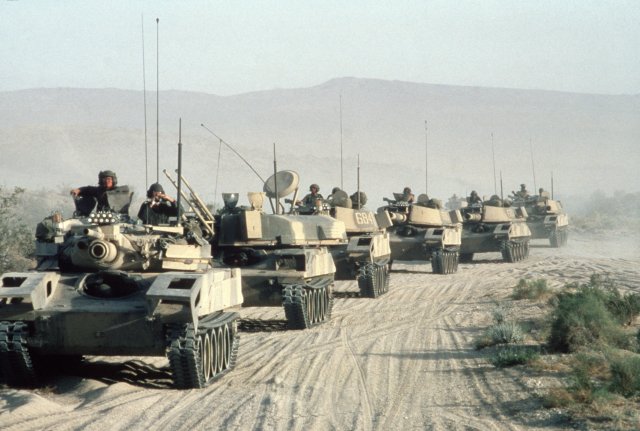 JULY 2, 2019 – Infantry Soldiers are closer to getting their hands on a “light tank” that will boost the firepower of their formations without slowing them down.

The Mobile Protected Firepower vehicle, part of the Next-Generation Combat Vehicles suite, is currently in competition after two vendors were chosen in December to each build 12 prototypes for under $376 million.

Beginning in March, those prototypes will be put through the wringer in a series of lethality, survivability and mobility tests. A light infantry unit at 82nd Airborne Division will also conduct an assessment later next year to gain Soldier input.

“It will be the first time anybody really puts their hands on it,” said David Dopp, the vehicle’s project manager at Program Executive Office Ground Combat Systems. “That’s a real key test.”

The Army expects to receive about 500 MPFs, which it will start fielding in fiscal 2025. Each infantry brigade combat team will get their own 14-vehicle company for armor support.

One vendor will be chosen to begin producing the vehicles in fiscal 2022.

The “light tanks” would help infantry Soldiers blast through obstacles, take out machine-gun nests and defend against other armored vehicles.

“Infantry would go out on foot or in a Humvee, but then if they ran into some fortification, a bunker or other vehicles, everything kind of stopped,” Dopp said Wednesday at the International Armored Vehicles USA conference. “With MPF, we can break through that.”

The “light tank” will be a tracked vehicle with likely a 105 mm cannon and 7.62 mm coaxial machine gun for firepower, he said.

At least two of them would need to fit on a C-17 cargo aircraft, and each vehicle would weigh less than 40 tons, much lighter than an M1 Abrams tank that can weigh 60 tons or more.

“It has better mobility for the infantry than [an Abrams] tank,” Dopp said. “It goes where the infantry goes.”

The MPF could be a game-changer for infantry units and fill a lethality gap they have had since 1996, when the M551 Sheridan light tank was officially retired without a replacement.

“We haven’t put a ‘tank’ in a light infantry unit for a long time,” said Maj. Gen. Brian Cummings, head of PEO GCS.

Today, an infantry brigade combat team has little to protect itself from an adversary with light armored vehicles, particularly Russia, which the Defense Department considers to be a near-peer adversary.

“In flows a company’s worth of MPFs to help give an armor capability against the threat,” Cummings said, “so they’re not just there all by themselves with their javelin missiles.”

While the MPF will have some of the latest available technology, autonomous features as well as additional sensors and other improvements could be implemented into it in the future.

“When we get it out there, we’ll start looking to put on those more advanced technologies,” Dopp said. “It was all about getting it out there in a hurry.”