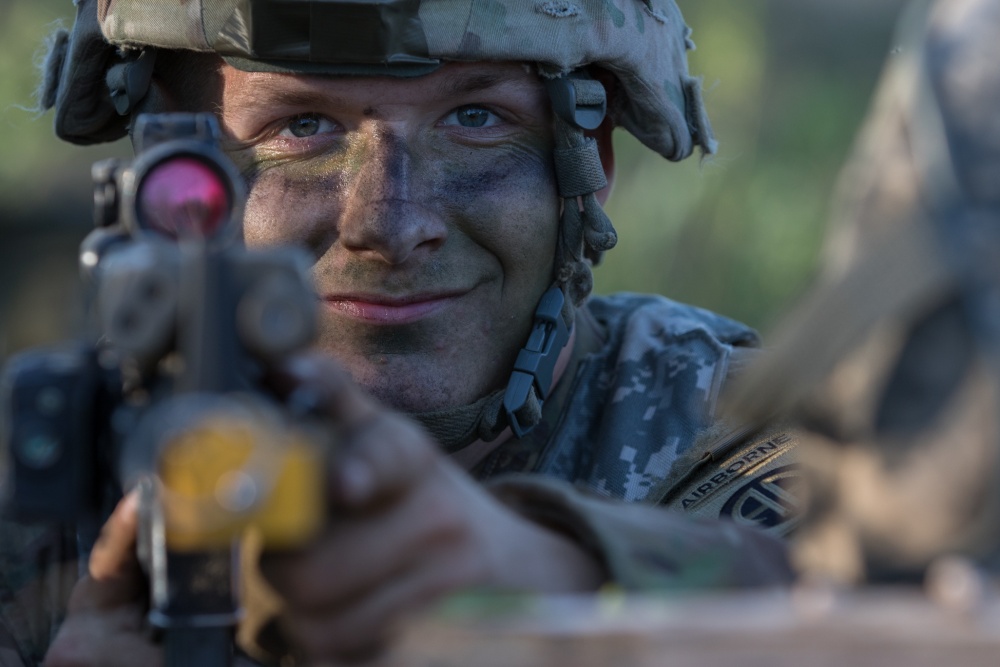 JUNE 11, 2018, Rukla, Lithuania – Just over a century since first stepping foot in Europe, members of the All American Division once again traversed the Atlantic Ocean to demonstrate the unique capabilities that few other units in the United States military can emulate.

Traveling aboard a C-17 Globemaster aircraft, elements of the 82nd Airborne Division conducted a non-stop flight from their home at Fort Bragg, N.C. to Lithuania and Latvia where they parachuted into their respective tree-lined drop zones during the early morning hours on June 9, 2018.

“We flew over seven-thousand kilometers from our location in North Carolina, performed one aerial refuel and then dropped in here [Lithuania] with enough combat power and communications to reach back to our home station and partner nations,” said U.S. Army Lt. Col. Scott Pence, the commander in charge of the jump near Rukla, Lithuania.

Pence and other members of the 3rd Brigade Combat Team, 82nd Airborne Division, jumped as part of the annual Swift Response training exercise.

“By working with our NATO allies and partner nations, we are able to maintain and strengthen our interoperability,” said Pence. “Everytime we do an exercises like this and work with the Lithuanians, the Polish or Latvians, we are able to test our communication systems, our signals and also our battle tactics, techniques and procedures.”

After jumping in, the Paratroopers quickly regrouped and began securing the airfield. As part of the exercise, Lithuanian soldiers played the role of opposition forces, creating a more-realistic training scenario and further validating the 82nd Airborne Division’s capabilities as a global response force.

This exercise demonstrates the 82nd Airborne Division’s ability to rapidly respond, and its resolve to assist its NATO allies and partners, said Volk.

“I am very motivated,” said Pvt. Daniel Guevara, a paratrooper assigned to the 1st Battalion, 508th Infantry Regiment, 3rd BCT, 82nd Airborne Division “This is the whole purpose of our training: to show our allies our readiness and show our command we are ready to go anytime, anywhere.”