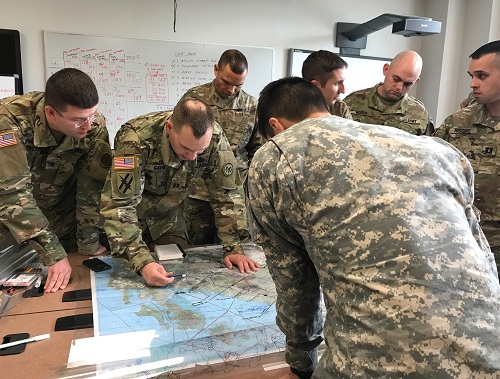 The bulk of the Soldiers are assigned to the 1st Battalion, 69th Infantry, which has units in New York, Farmingdale and Camp Smith Training Site near Peekskill.

A team from the headquarters of the 27th Infantry Brigade Combat Team will accompany the task force as an administrative support cell.

The New York National Guard Soldiers are deploying as part of a regularly scheduled Australian/U.S. military exercise known as Talisman Sabre. The exercise is held every other year and involves 30,000 Australian and American military personnel at six different locations conducting field exercises and command and control exercises.

Australia and the United States have been allies since the Second World War.

The bulk of the training in the field, which has focused on amphibious and air assault operations during past exercises, takes place at the Australians’ Shoalwater Bay Training Area.

The training site is located near Rockhampton in the Australian state of Queensland, along Australia’s northeast coastline, north of Brisbane.

The extended annual training this year provides the battalion with an opportunity to conduct much more complex and integrated training for the combat Soldiers. A routine training period would only encompass 15 days.

The New York Army National Guard Soldiers have been preparing for the mission for the past year, according to Lt. Col. Don Makay, the battalion commander. The Soldiers have conducted road marches with full field gear and tactical training exercises at the platoon and company level to get ready.

Unit Soldiers prepared and shipped equipment and 139 vehicles required for the mission to Australia and an advance party from the battalion is already in Australia. A team of Soldiers in Fort Lewis, Washington, prepared the vehicles and equipment for shipment across the Pacific.

The Americans have also met with their Australian counterparts to prepare orders and plans that integrate the National Guard into the Australian Army unit they will be training with, Makay said.

For the exercise, the 1st Battalion, 69th Infantry will be part of an Australian Army brigade.

This mission is a great way for the Citizen-Soldiers of the 69th Infantry to demonstrate their ability to mobilize and deploy to anyplace in the world, Makay said.

The unit will return to New York at the end of the month.