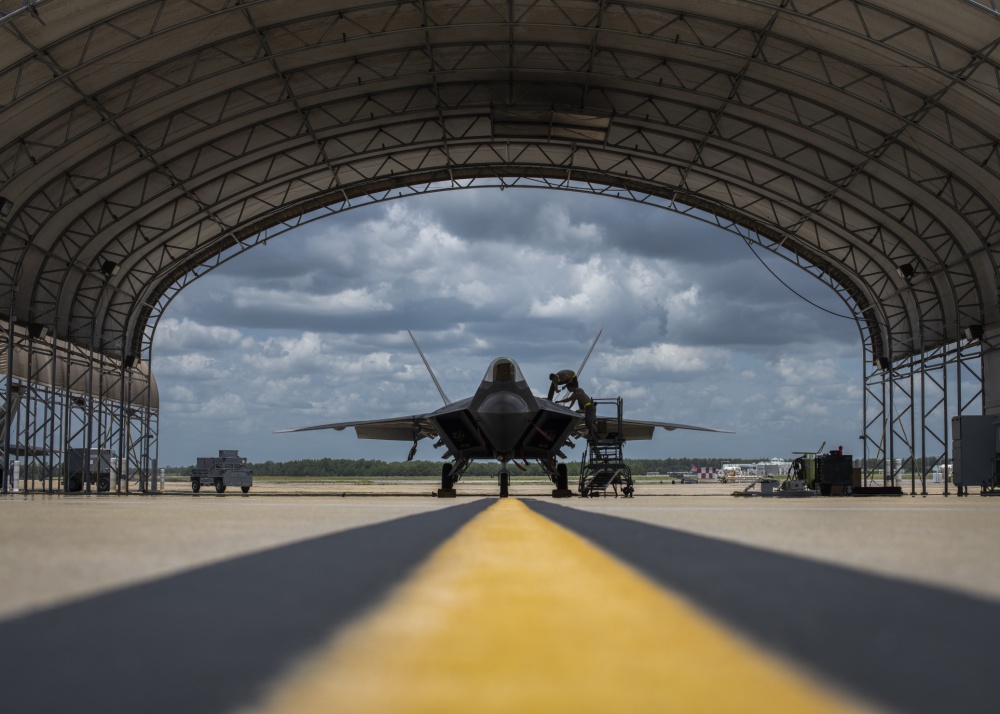 OCTOBER 10, 2019 – Houses torn to pieces, an entire base left in shambles and people left devastated by the destruction. One year ago, Hurricane Michael tore through northwest Florida directly impacting Tyndall Air Force Base.

“Hurricane Michael was a defining moment for our unit,” said Lt. Col. Adrienne Stahl, 325th Aircraft Maintenance Squadron commander. “We experienced professional hardship and personal tragedy, but it showed us what we are capable of overcoming together.”

After the Hurricane, F-22 Raptors and the 325th AMXS were relocated to Eglin Air Force Base, Florida. The goal was to get the F-22s flying again prior to Thanksgiving.

“We had a lot of struggles trying to relocate the unit to a location that had no F-22 infrastructure, but we were able to set up and begin flying before Thanksgiving, which was a huge milestone for our unit,” said Capt. Jessica Meadows, 43rd Aircraft Munitions Unit officer in charge. “We even proceeded to fly more sorties after the Hurricane than before.”

Even when a natural disaster occurs, the mission can’t stop because our adversaries are a constant threat. Airmen of the 325th AMXS demonstrated resiliency and strength by exceeding in their work.

“We asked a lot of these Airmen and not only did they achieve the mission, they surpassed anything that has ever been done before,” said Stahl.

An entire unit was picked up and relocated to another base because of Hurricane Michael, but one single base could not handle that massive influx of personnel, so people were dispersed throughout the United States.

“Around 470 personnel within the 325th AMXS needed to be relocated across the country, which became a monumental challenge to keep track of everyone and how they were doing,” said Senior Master Sgt. Richard Ellsworth, 43rd AMU assistant superintendent.

Leaders between all bases involved worked with one another to ensure anyone effected by the Hurricane had the ability to attend to home matters when needed.

“It was difficult to focus on work and home life, but leadership at Tyndall and Eglin both did a really good job allowing us to prioritize what was necessary at home as we were trying to get back to working comfortably and efficiently,” said Meadows.

“Leadership understood if I had to leave for a day to meet with the contractor and when I had to answer phone calls relating to issues with my house,” said Staff Sgt. Matthew Pugliese, 325th AMXS avionics craftsman.

Dealing with contractors, insurance and mortgage companies and other financial hardships, a natural disaster adds additional stress onto an already stressful job. Airmen of the 325th AMXS dealt with these stressors and still produced a higher numbers than before.

“The hurricane put us three months behind our flying schedule,” said Ellsworth. “One of the things we came up with was ‘rapid crew swaps,’ which was a first for the F-22 community. A pilot will fly a sortie, land and provided the aircraft is good to fly again, another pilot will get into that same aircraft. That allows us to fly more sorties within the day, which helped us catch up the pilot class that was behind.”

The F-22 program here is now back on schedule with pilot training because of out-of-the-box thinking throughout the 325th AMXS.

“These accomplishments are due to the resiliency of the Airmen,” said Ellsworth.