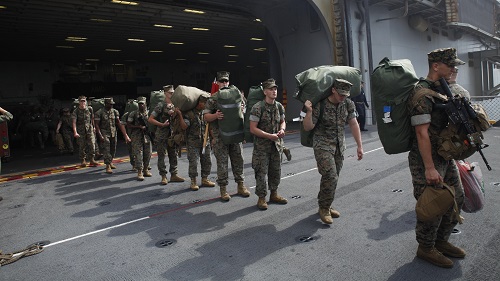 “As the U.S. Marine Corps’ force in readiness in the Pacific, the 31st MEU must be ready to respond at a moment’s notice to a wide range of military operations and work alongside our partners and allies,” said Col. Tye R. Wallace, commanding officer of the 31st MEU. “Fall Patrol 2016 helped us sustain unit readiness and further our cohesion with partner nations.”

While deployed, the 31st MEU integrated with a U.S. joint task force comprised of the U.S. Air Force, U.S. Army, U.S. Marine Corps and U.S. Navy to conduct training during Exercise Valiant Shield 2016 on Guam and around the Commonwealth of the Northern Mariana Islands.

Valiant Shield is a biennial field training exercise held in Guam with a focus on integration of joint U.S. forces.

“Valiant Shield enabled real-world proficiency in sustaining joint forces at sea, in the air, on land, and in cyberspace in response to a range of mission areas,” said Wallace. “This year, the training went really well and all the Marines were able to benefit.”

After Valiant Shield, the 31st MEU participated in Amphibious Landing Exercise 33 at several locations across the Philippines. The exercise improved military relations with the Armed Forces of the Philippines through bilateral training, including humanitarian civic assistance, amphibious landings, and a combined arms live-fire exercise.

Each Marine and Sailor within the Marine Air-Ground Task Force contributed to the success of the Fall Patrol, according to Sgt. Maj. Jim Lanham, the senior enlisted Marine within the 31st MEU.

“The Marines and Sailors of the 31st MEU worked hard throughout the float to maintain and build on the operational readiness we are known for,” said Lanham.

Throughout the patrol, leaders across the 31st MEU encouraged initiative and a focused joint effort to increase operational readiness and mission focus during each stage of the patrol, according to Lanham.

“Prior to each patrol, the Marines and Sailors of the 31st MEU are thoroughly trained in unique capabilities to remain continuously ready,” said Lanham. “This patrol allowed the MEU to test and improve on our capabilities.”