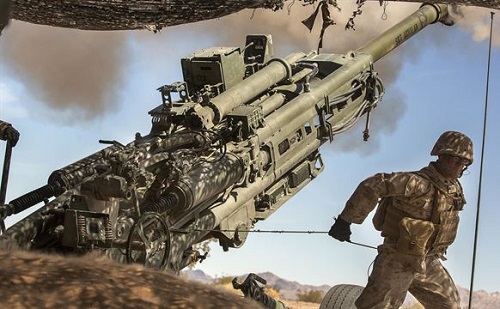 ‘Thunder’ conducted the experiment as part of an ongoing 18-month acquisition program agreement with the Program Manager Towed Artillery Systems of Picatinny Arsenal, New Jersey, to evaluate the chrome-plated barrels prior to making a decision to go into full-rate production. This firing exercise was focused on the ability of the M776 Chrome Tubes to resist the formation of hardened downbore residue when firing the M232A1 Propelling Charge 5H (top zone charges).The exercise consisted of gun crews firing 50 M232A1 top zone charges, or an equivalent full charge without cleaning the cannon using conventional means to prevent the accumulation of residue.

“We came out here to test how the chrome plating reacts to having such a large charge go through it,” said Sgt. Brian Smart, section chief, 3/11. “When we finished, we left the lining alone so the people who designed it could do their measurements and see how the material held up.”

Currently, the Marine Corps and Army utilize a steel barrel for their howitzers. This new design incorporates a chrome plating, which helps to extend the life of the tube by two to three times and has prevented buildup of residue within the bore during controlled testing. This allows the gun to fire top-zone charges in succession without the need to fire a lower-zone charge to clean out the barrel, a requirement for the legacy steel barrel.

According to Smart, the chrome-lined tubes have shown numerous advantages, in both cleaning and durability, over their legacy steel counterparts.

“It’s a lot easier to clean than the old steel tubes because they would cake up, while the chrome lining tends to shed off residue a lot easier,” Smart said. “In theory, we could be able to use these tubes almost indefinitely before they start to wear down.”

The chrome tubes have a projected sustainability of more than 2,600 EFCs, before it starts to wear on the chrome plating.

“Most of the time, we are shooting four or lower charges,” said Master Sgt. Davy Cadd, battalion field artillery chief, 3/11. “It often takes 10 or more rounds for us to get up to a single EFC. The [chrome plating] enables us to fire thousands and thousands of rounds before we start to wear the tube.”

Clede O’Neal, test manager, PM-TAS, explained that the Chrome Tube Program has more than a decade of testing at US Army Yuma Proving Ground. At first, the chrome plating had issues with unacceptable amounts of chrome loss; however, the cannon designer and manufacturer have significantly reduced the amounts of chrome loss to help ensure the tubes are ready for troops to use.

“We are giving the tubes to the unit so they can assess how well the tubes work as far as durability and their ability to be cleaned and inspected,” O’Neal said. “At the end of the program, if the Marines and the program office are satisfied, we may be approved to start a M776 Chrome Tube Full Rate Production program to retrofit as many of the M77A2 Howitzers as funding permits.”

For the experiment, PM-TAS chose the Combat Center for its vast training area and harsh environment to better gauge the resiliency of the chrome plating.

“We looked at units and installations across the Marine Corps when deciding where the best place was to field the tubes,” O’Neal said. “We found [the Combat Center] had the best conditions to fire top zone charges, which allows us to create the harshest conditions possible for testing the chrome tubes.”

According to Cadd, it is important to test and experiment with new equipment to find better ways to accomplish the mission and support the service members in the operational environment.

The M776 Chrome Tube was designed by Benet Laboratories with US Army Armament Research, Development, and Engineering Center and manufactured by Tank-automotive Armament Command at Watervliet Arsenal. PM-TAS has oversight for the M777A2 Howitzer and the M776 Chrome Tube acquisition program.