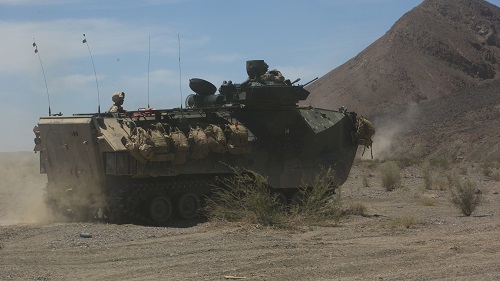 FINEX began with Camp Lejeune, N.C.-based 2nd MarDiv conducting a simulated assault on an enemy’s defensive position. Marines with 3rd Battalion, 2nd Marine Regiment, advanced toward an objective after batteries with 1st Battalion, 10th Marine Regiment, suppressed the enemy with artillery support. Once the Marines secured the enemy position, they turned it into their own defense. Marines conducted the exercise to simulate a day and night defensive, before concluding with a counterattack, also known as a breakout exercise.

“We do the breakout exercise because Marines are always on the offensive,” said Lt. Col. Bradley Pennella, commanding officer, 1/10. “The Marines showcased the force and power of our unit during FINEX, which is something that can only be achieved at the Combat Center because of the size of the training area.”

Integrated Training Exercise is a 28-day exercise designed to assess Marine units’ proficiency across a wide spectrum of training objectives. The goal of ITX is to ensure that units are capable of operating as an integrated Marine Air Ground Task Force. For Marines, this means learning to work in conjunction with other MAGTF components, such as the Aviation Combat Element, Ground Combat Element, Logistics Combat Element and Command Element.

During FINEX and throughout ITX, infantry units such as 2nd Battalion, 8th Marine Regiment, and 3/2 receive urban assault and combined-arms maneuver training. As the battalions progress through the training, they are required to integrate together as a cohesive team through shared planning, briefing, rehearsals, execution and debriefing.

“This is the best opportunity for us as artillerymen to integrate with our infantry brethren and practice our ability to plan and then execute indirect fire in support of infantry and other maneuver units,” said Capt. Ronald Bess, operations officer, 1/10.

During their month at the Combat Center, units participate in exercises designed to access Marine units’ proficiency in a wide spectrum of training objectives. Such objectives include ranges and courses of fire that the Combat Center is known for like the Range 400 combined-arms attack series. In addition units perform a long range raid and non-combatant evacuation operation.

“ITX is the closest thing to combat when it comes to using the MAGTF as a whole,” said Pennella. “I’m confident my Marines are ready and well-trained for any upcoming deployments.”