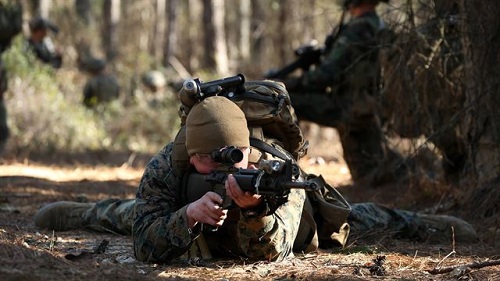 “The CCE is a good opportunity for the Company Headquarters to exercise command and control and refine their producers to ensure that we work as a cohesive staff,” said the company 1st Sergeant.

The MSOTs had the opportunity to train a simulated partner nation force during the CCE. They also completed multiple ranges and raids honing both their individual skills and team TTPs.

Marines from Marine Corps Air Station New River, Security Forces and I and I Greenvile made up the supporting elements and partner nation force.

“There is a big difference between what we do in garrison and what we have been doing out here,” said Sgt. Conner Fiero, a Marine assigned to Headquarters and Headquarters Squadron, MCAS New River. “From the air wing side we only get to see one demission of the assault, out here we have gotten to see how the air craft operationaly employed, troop movements, how the troops communicate with the aircraft and the actual assault which turns it into a 3-D picture.”

The CCE is designed to validate all the training the Raiders have done up this point said the Company Operations Chief with Company F.

“All the training they have done, all the time they’ve been away, all the hardships they’ve faced, all the struggles have paid off, its paid off through leadership and mentorship from the supporting elements to the team commanders and team chiefs,” said the Company Ops Chief. “Their (Marine Raider’s) mindsets have been brought up from conducting unilateral operations to being able to fully integrate not only enablers but a partner nation force who may have a language barrier or not have the same level of training.”