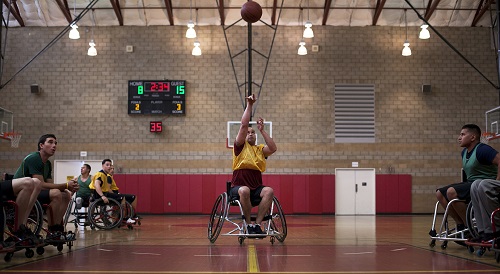 The Marine Corps Trials provide an opportunity for all wounded, ill, or injured Marines, sailors, and veterans to further the rehabilitation of their mind, body, and spirit through competition and camaraderie. For some, the Trials are a milestone in their personal athletic goals. For others, it is an opportunity to experience new activities and connect with their fellow wounded warriors. For all of the participants, the Trials are a chance to come together and focus on their abilities, not their disabilities.

Media are invited to attend training sessions and competitions for all events. Those interested in attending the Marine Corps Trials aboard Camp Pendleton should contact 1st Lt. Andrew Bolla at 703-859-5364 or via email at wwr_pao@usmc.mil.

Spectators are welcome. Parking and admission are free to the public. Non-military spectators need to bring a valid driver’s license and registration. All visitors must enter Camp Pendleton using the far right visitor lanes at each gate. The final schedule will be posted at www.woundedwarriorregiment.org and www.facebook.com/wwr.usmc on March 1.

To view highlights from the 2015 Marine Corps Trials visit http://ow.ly/Ye6vz.

Established in 2007, the Marine Corps Wounded Warrior Regiment is the official command charged by the Commandant of the Marine Corps to provide leadership and facilitate the integration of non-medical and medical care to combat and non-combat wounded, ill, and injured (WII) Marines, sailors attached to Marine units, and their family members in order to maximize their recovery as they return to duty or transition to civilian life. The regimental headquarters, located in Quantico, Va., oversees the operations of two wounded warrior battalions located at Camp Pendleton, Calif., and Camp Lejeune, N.C., as well as multiple detachments in locations around the globe.

For more information about the Wounded Warrior Regiment go to: www.woundedwarriorregiment.org or visit us at www.facebook.com/wwr.usmc.