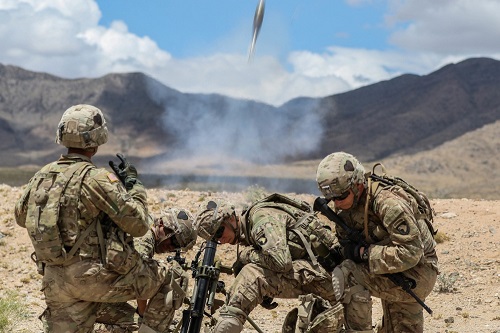 The testing, part of the Network Integration Exercise 17.2, took place at the Dona Ana Range Complex in New Mexico. It is the first time a rotational unit has participated in the NIE.

For the Soldiers of the 1st Battalion, 26th Infantry Regiment, also known as the “Blue Spaders,” the environment at the range allowed them to condition themselves for the kind of climate and topography they might face at training operations at the National Training Center, Fort Irwin, California or combat operations in the Middle East.

“It’s an opportunity to train platoon attack in an austere environment and specifically in a desert environment which is different from what we have at Fort Campbell,” commented Maj. James Vance, battalion operations officer with 1st Battalion, 26th Infantry Regiment, 2nd Brigade Combat Team, 101st Airborne Division, on the Dona Ana Range.

The battalion also utilizes this unique training opportunity to improve the skills of its platoon-level leaders and Soldiers.

“For my Soldiers, I want them to be competent and confident in their weapons systems and their ability to maneuver and destroy the enemy,” said Swan. “It is a great opportunity for them to go through the platoon, all the way up to the battalion level situational training exercise operations and get after Mission Essential Task Lists (METL), which will define how they achieve success in the battlefield.”

During the NIE, Soldiers test and familiarize themselves with equipment that they may use in the field on a future training or combat mission. The feedback they provide will help Army leaders to pursue continued advances in weapons and systems technology that can be fielded to Soldiers in the future.

Along with supporting the primary goals of NIE, the battalion also utilizes their time at the range to execute training that matches their METL.

“This is a great opportunity for us to build our live fire proficiency at the platoon level and then that will carry us into company and battalion level proficiencies, as we prepare to go to Joint Readiness Training Center (JRTC) in January of next year,” said Vance. “This exercise fits nicely, as we continue to form the unit as we prepare to assume our assigned missions from the Army in the spring.”