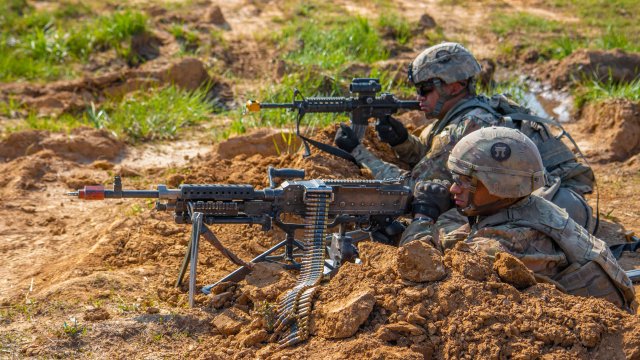 MAY 17, 2018, Fort Campbell, KY – As the sun was setting and the blades of grass cut through the wind, Soldiers secured a tactical perimeter while remaining vigilant of their surroundings for any enemy movement.

The batteries within the battalion conducted Field Artillery Gunnery Table XV missions while conducting operations across multiple training areas and position areas for artillery, encountering 10 tactical injects, which allowed leaders at all levels to understand the mission requirements of operating in a decisive action environment.

The purpose of this training exercise is to evaluate a battery’s collective task proficiency on fire mission processing and battery defense. The intent is for batteries to provide timely and accurate fires, train on the execution of battery fire missions, conduct technical and tactical control and exercise digital systems.

The exercise started with Bravo Battery conducting various tactical drills which included reacting to indirect fire, a convoy attack, an emergency fire mission, mass attack and reacting to probes. These battle drills enhance Soldier performance by enabling units to prepare, react and counter-attack while on the battlefield.

The following week the remaining batteries followed suit through the training areas. As they conducted training, the battery’s sections utilized skills such as time management between Soldiers pulling security, eating and maintaining their equipment while in a field environment.

“We’re out here conducting Table XV which consists of a battery offense and defense, so it will be simulating an aggression to push back the enemy and then to take an objective,” said Staff Sgt. Travis Prater, Bravo Battery 3-320th Field Artillery Regiment, 101st Airborne Division Artillery, 101st Airborne Division (Air Assault). “Once we reach that objective, we will then consolidate back into a battery defense to hold our positions and maintain whatever terrain we’ve captured.”

The unit made the training as realistic as possible, said Prater. There were opposing forces that did anything from small arms attacks, indirect fire, chemical, biological, radioactive and nuclear attacks, complex ambushes and block ambushes.

During the day, the batteries also conducted base jumps as they received attacks, then they proceeded to move to different training areas and set up base there, which continued throughout the night. Doing this allows a battery to remain hidden and also provides an opportunity for less experienced Soldiers to receive real time training and prepares them to perform optimally on the battlefield.

When the batteries received an attack, they moved rapidly to their firing and security positions to defend against and eliminate the enemy threat. This goes hand and hand with Soldiers being able to effectively and efficiently know their assigned weapons. Although the batteries are equipped with the Howitzers, the Soldiers are equipped with the M4 carbine, M240B machine gun, M249 light machine gun and M2A1 .50 caliber machine gun.

As a battery arrived to a new training area, they had a maximum of six minutes to set up their M119A3 Howitzers. Once the Howitzers were set in place, the battery gradually secured the area by digging firing positions, establishing communication with the tactical operations center and placing concertina wire around their perimeter.

First-aid was also a big key point during the exercise. When the batteries were attacked and suffered notional casualties, they were tended to by the medics attached to the batteries and Soldiers alike. This is essential to training as it improves the Soldiers’ reaction time when casualties are in play.

The roles that are played during these training events have proven valuable in building muscle memory and enhancing proficiency and effectiveness in a tactical environment for future deployments. As the Field Artillery Soldiers continue to train, it is clear that the sound of artillery remains a vital part of our Army.