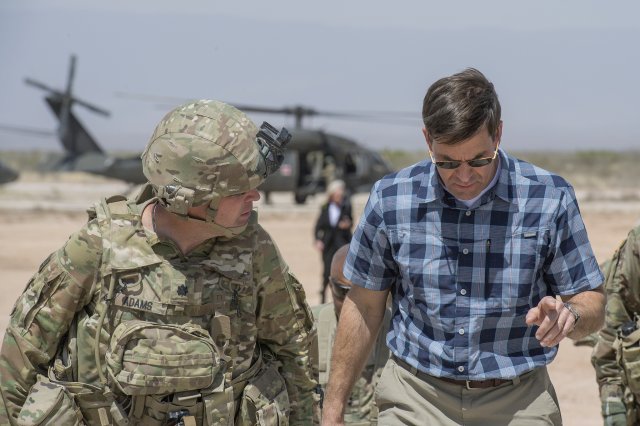 JUNE 7, 2018, Washington D.C. – In 1973, as the draft ended and America withdrew from Vietnam, the Army made it a priority to catch and keep the technological edge in weapons and equipment — setting up the formation of Training and Doctrine Command and Forces Command.

As America’s defense policy reoriented, the Army underwent a thorough modernization of its combat arms and aviation units through training reform, weapons, equipment, and force modernization, and revising doctrine at the beginning phases of a new strategic order.

It was, and still is, imperative that the Army keep its technological edge in weapons and equipment against our near-peer competitors. “Our competitors are seeking to alter global strategic realities for their own benefit, often at the expense of the U.S. interests and those of our allies and partners,” Secretary of the Army Dr. Mark Esper said in his opening statement to the House Appropriations Committee on the posture of the U.S. Army, March 20.

The Army’s current competitive advantage is in its Soldiers’ ability to rapidly deploy anywhere, anytime, and producing a combat-credible deterrent against potential adversaries.

While a great advantage to have, Dr. Esper stated in the posture hearing that “some of the key challenges, and the Army’s in particular, is defining our requirements and then implementing them.”

Over the past 30-plus years, the M1 Abrams tank, M2 and M3 Bradley fighting vehicles, the UH-60 Blackhawk and AH-64 Apache helicopters, and the MIM-104 Patriot air defense missile were developed and fielded. But in the past quarter century, the Army ceased to innovate, and with a large decrease in readiness, this technology has become outdated and overmatched.

The defining idea of the Army Vision, as laid out by Secretary Esper in a speech at the Brookings Institute June 5, is that the Army of 2028 will be ready to deploy, fight and win decisively against any adversary, anytime and anywhere, in a joint, multi-domain, high-intensity conflict, while simultaneously deterring others and maintaining its ability to conduct irregular warfare. “Modernizing today’s equipment will align us to the future battlefield,” Esper said.

To do this, The Army cannot look back 30 years, but instead must look forward in its ability to man, organize, train, equip and lead future Soldiers. Trusting and empowering subordinate leaders will facilitate both reform and greater performance. “We need to tap the talent of all the American people,” said Dr. Esper. “We need to reach out to traditional industry and non-traditional” to forge the road ahead.

“We have to change the character of warfare in our favor,” the secretary added, outlining his six priorities for Army modernization: Long-Range Precision Fires, Next Generation Combat Vehicles, Future Vertical Lift, Network, Air and Missile Defense, and Soldier Lethality.

The current global security challenges are growing and the Army can prepare itself by increasing capacity, training, improving and correcting critical gaps resulting in a far more lethal Army, ready now and prepared for the future. As Dr. Esper said, “We must prepare for the toughest fight. We must now build the Army of 2028.”

By Mr. Daniel Torok (Secretary of the Army)