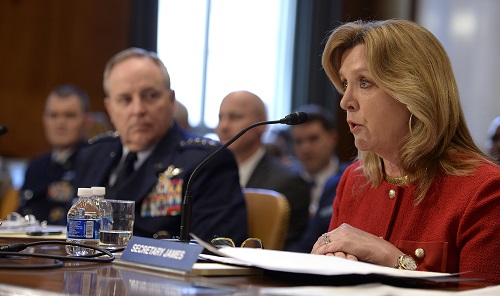 Both James and Welsh stressed that the need for airpower continues to rise and the gap between the U.S. Air Force and its closest pursuers is closing.

“Bottom line here is that … we are fully engaged in every region of the world, in every mission area, across the full spectrum of military operations,” James said. “Put simply: we have never been busier on such a sustained and such a global basis.”

“The United States can’t fight, much less win, today’s wars without airpower,” Welsh said. “That’s just the way modern warfare has moved. The demand signal for that airpower continues to rise. While we work hard to continually become more efficient, which we must, and to minimize the cost of effectively operating our Air Force, if less capability or less capacity or less readiness eventually means we lose even one more young American on the battlefield, we’ll all wish we’d made better investments.”

In her opening statement, James outlined her three priorities: taking care of people, balancing readiness and modernization, and making every dollar count, which are the foundation of the president’s fiscal 2017 budget.

“Airmen and their families are the Air Force’s most important resource and our budget reflects this truth,” James said.

James stated her second priority is getting the balance right between readiness and modernization.

“As we have explained in the past, less than half of our combat air forces are ready today for a high-end fight,” James said. “Our aircraft inventory is the oldest it’s ever been, and our adversaries are closing the technological gap on us quickly so we simply must modernize.”

In 2013, sequestration put a strain on the Air Force, forcing the service to park jets, delay upgrades and halt training, which created a gap in readiness.

“For the last two years we have been trying to rebuild that readiness but of course our Airmen have needed to respond to real-world events across the globe,” James said. “If we return to sequestration in (fiscal 2018), this will exacerbate the readiness problem and set us ever further back. If this happens, our Airmen could be forced to enter a future conflict with insufficient preparation.”

In order to equip the force, the Air Force has invested in the F-35 Lightning II, KC-46 Pegasus and the long-range strike bomber, but modernization doesn’t stop there.

“The platforms and systems that made us great over the last 50 years will not make us great over the next 50,” Welsh said. “There are many other systems we need to either upgrade or recapitalize to ensure viability against current and emerging threats. Without additional funding, the only way to do that is to divest old capability to build the new. That requires very difficult, emotional decisions — decisions that simply must be made if we are truly to provide for the common defense.”

According to the Fiscal Year 2017 Air Force Posture Statement, as the challengers of the Air Force employ increasingly sophisticated, capable and lethal systems, the Air Force must modernize to deter, deny and decisively defeat any actor that threatens the homeland and its national interests.

“Twenty-five years of combat operations have dramatically impacted our total force readiness, significantly aged our equipment and has shown the brilliance of our Airmen and the loyalty of their families,” Welsh said. “The world is changing, the threat is changing and our Air Force must change with it if we’re to remain relevant. Today, American airpower is a given and I believe it’s our job, collectively, to ensure this nation’s ability to deliver that airpower, when and where it matters most, does not diminish over time.”

The posture reflects the third priority, which is the Air Force’s commitment to preserving taxpayer dollars with a number of initiatives that include streamlined energy usage and cost saving ideas directly from our Airmen.