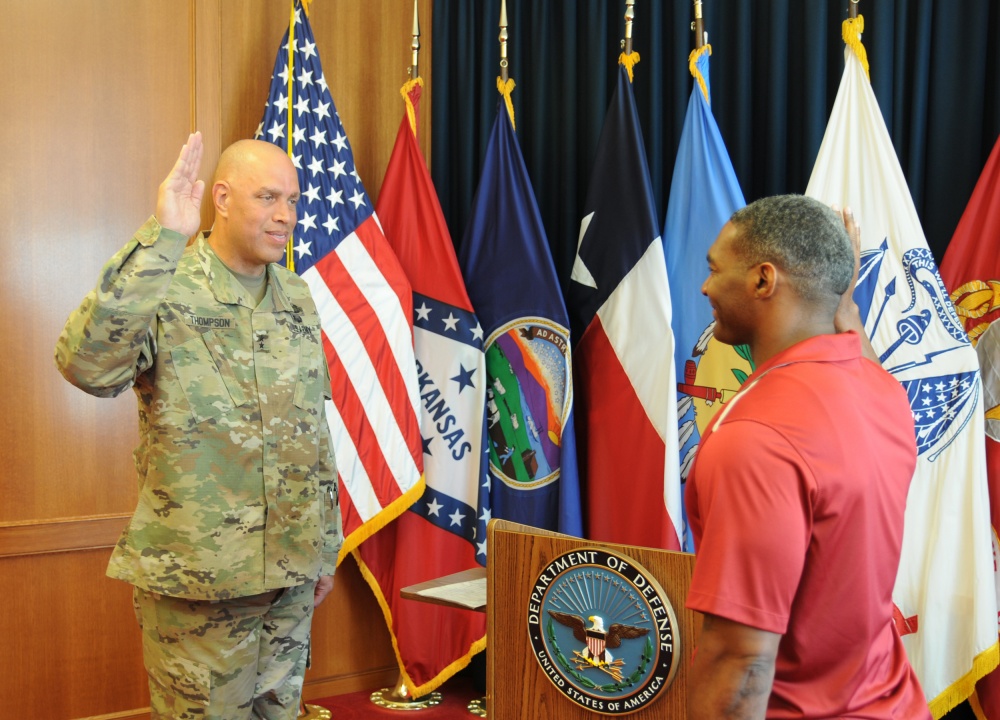 “I knew that there was a possibility that I would not be able to join but I decided to go ahead and try,” said Rideaux.

On paper, Rideaux, 40, was nothing short of a model recruit, but his initial attempt to enlist was rejected due to his age. U.S. Army regulation requires recruits to ship to BCT before their 35th birthday, a change from the previous age cut-off of 42.

For Rideaux to enlist, he needed an exception to policy approved by the Department of the Army. His resilience and can-do approach to life steered him through many obstacles, this one included.

Nearly two years after his initial application, a native of Midwest City, Oklahoma, former University of Oklahoma graduate and football player, former free safety for the NFL’s New England Patriots and current Oklahoma Highway Patrol trooper, took his Oath of Enlistment into the Oklahoma Army National Guard as a forward observer. A forward observer is designated as a “13 Foxtrot” in the Army’s catalog of military occupational specialties.

Accustomed to the team setting, Rideaux describes his decision to enter the Oklahoma Army National Guard as a “no-brainer”.

“One of my [OHP] partners inspired me to join,” said Rideaux. “Currently, I serve as a state trooper and would like to continue serving my community in various ways. It makes you feel special when you can help people, and they appreciate it.”

“I remember when he first approached me,” said Maj. Gen. Michael Thompson, adjutant general for Oklahoma. “He said ‘give me a chance and I will not let you down.’ He has done everything that we’ve asked of him. It takes a lot of work for anyone to get to this point. I believe he will do great things.”

Thompson and former University of Oklahoma head football coach, Bob Stoops, provided letters of recommendation in support of his enlistment, which were submitted with the exception to policy request.

“Bob is such a good guy,” Rideaux said. “I’ve known him for many years, at least ten. He is a major supporter of my decision to join.”

“I have been a recruiter for 12 years. I knew when I first met him that we should give him a chance,” said Sgt. 1st Class Travis Stoeser, recruiter for the Oklahoma Army National Guard. “He has a spark about him. He is very honest and humble.”