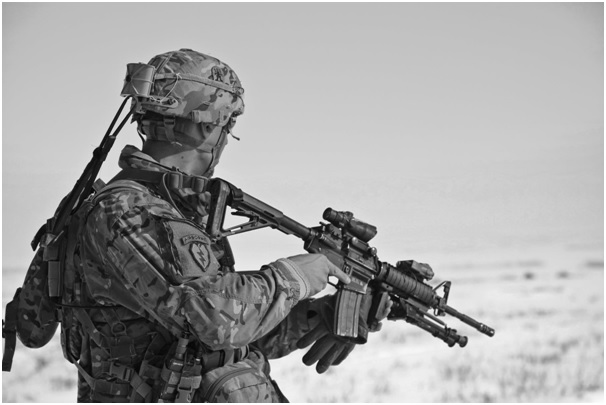 FEBRUARY 1, 2019 – As time goes by, countries around the world are improving their technologies in all aspects, especially when it comes to military tech. It’s essentially a race as to who develops the best military equipment. In a world that’s constantly changing, getting left behind simply isn’t an option.

On the frontlines, it’s the soldiers that are at risk. Vast improvements in military tech are aimed at the safety of our soldiers, that’s why it’s crucial that we equip our men and women out on the field so they can do their job safely and effectively. Do take note though. Not all these tech are harmful and are used for war.

1: TAR HUD
The TAR HUD or “Tactical Augmented Reality Heads Up Display” is mostly used by a lot of soldiers out on the field. This intricate piece of hardware is attached to a soldier’s helmet and projects images and other related information on a small eyepiece.

When it comes to the uncertainty of war, information is a crucial piece in helping a soldier achieve his or her objectives. The fog of war or the uncertainty of some elements on the battlefield is what most soldiers fear when performing their duties.

With the TAR HUD, mission objectives, data, important targets, etc. are displayed so that the soldier knows what to do when in the field.

2: TCAPS
The Tactical communication and protective system is an earpiece that has a unique and smart function that protects the eardrums. When an explosion is about to happen, the TCAPS detects sounds that can damage hearing and knock out a person. TCAPS essentially lowers the volume or completely blocks the sound, protecting the soldier.

In stealth situations where sound can either be an advantage or liability, the TCAPS also provides a ton of assistance. In these missions that require soldiers to be stealthy, the earpiece enhances the whispers of team members so information is relayed properly and done in minimum volume.

3: Predator Drone
When it comes to taking out valuable targets deep within enemy lines, the predator drone is the best piece of hardware to do the job. The predator is a UAV or unmanned aerial vehicle which has several types of payloads, depending on the mission.

In the field, soldiers either use a laser designator or use rugged computers to pinpoint targets. Predators have built-in camera systems that show high-quality images to the soldier.

4: MRE
Meals, ready to eat packs are often the best friends of hungry soldiers out on missions. MRE’s are food packs or rations that contain a lot of food items inside, including potable water and other important drinks.

Believe it or not, an MRE often tastes good and often have a lot of varying food inside of them. These packs can contain spaghetti and meatballs, tacos, bacon and eggs, etc. Some packs even have chocolate cake inside. What’s unique is that MRE’s do not require heat to cook. All you do is add water and wait for it to be done.

5: Body Armor
Every law enforcement and military personnel have to wear a ballistics vest during operations. Ballistics vests or more commonly known as kevlar vests provide protection against certain ammunition. Ballistics vests do not stop bullets, they simply slow it down and reduce the damage of bullet impact on the body.

Takeaway
When it comes to modern technology, it’s important that countries improve their military powers. Every piece of equipment aims to protect and enable soldiers to do their job without harm. Gear such as TCAPS, Kevlar vests, and TAR HUDs make our men and women’s lives on the battlefield much easier and safer.