UPDATED OCTOBER 2021 – The Occupational Physical Assessment Test (OPAT) is a battery of four events used to assess a recruit’s capabilities to engage in physically demanding Army training. As an assessment, the OPAT measures physical capacity in the three major areas of physical readiness: upper- and lower-body power, lower-body strength, and aerobic endurance.

Individuals are graded against established standards for each of the four OPAT test events and scored according to the weight, distance, or number of intervals required to pass each test event. Scores are categorized at three levels from highest to lowest: heavy (black), significant (gray) and moderate (gold). To receive a qualifying score at each category level, individuals must follow proper testing protocols and meet required distances and/or quantities for each test event.

Standing Long Jump
The purpose of the Standing Long Jump is to assess lower-body power. You will stand behind the take-off line with your feet parallel and shoulder-width apart. You will jump as far as possible with a two-foot take-off and landing. You are allowed to rock on your toes and heels, but your feet cannot leave the ground before the jump. The jump begins by moving both arms forward and backward (arm counter-movements) while bending at the knees and hips. Do not move your feet after landing. After landing if you move your feet you may be asked to repeat the jump. If you fall backwards or forwards, you will repeat the jump. You may perform two sub-maximal practice jumps followed by three maximum effort jumps. The jump is scored to the nearest centimeter from the heel closest to the take-off line. 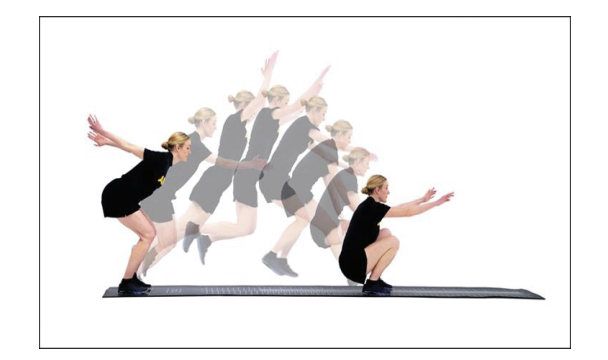 Seated Power Throw
The purpose of the Seated Power Throw is to assess upper-body power. During the test, you will sit on the floor with your legs extended straight out in front of you resting on the ground. Your feet will be behind the restraining line. You will hold the medicine ball with two hands. On the command, “GO,” bring the medicine ball to your chest with your elbows comfortably at your sides. You will pause briefly, then push-throw the medicine ball upwards and away from you at a 45-degree angle. To maximize the distance of the throw, you may lean backwards and forwards at the waist and follow through by flexing your wrists. Do not throw the medicine ball like shooting a basketball. The distance of your throw will be measured from the restraining line to the spot the ball lands. You will be offered two practice throws. After the practice throws, you will perform three maximal effort throws. The throw is measured to the nearest ten centimeters from the wall to where the ball contacts the ground. Watch this demonstration.

Strength Deadlift
The purpose of the Strength Deadlift is to assess lower-body strength. Beginning with an unloaded bar or a loaded bar with less than 40 pounds. You will squat down, grasp the bar and complete a set of 2 practice deadlifts. These “check” lifts will be used to check for proper lifting form. After completing the check lifts, you will execute one record attempt at a weight of your choosing from 120 to 220 pounds. You will begin the record attempt by standing inside the bar with your feet about shoulder-width apart. Make sure your knees are in line with your toes, bend at the hips and knees, and grasp the bar with your arms at your sides and fully extended—elbows straight. On the command, “READY, LIFT,” lift the bar straight up by extending your knees and hips in a slow, smooth, and continuous movement. When you are standing with your hips and knees fully extended, you will be given the command, “DOWN.” You will lower the bar to the ground in a controlled manner. The weight plates must touch the ground. You will repeat this movement two more times for a three-repetition deadlift. If you show poor lifting technique or if you exhibit any pain or discomfort, the grader will direct you to put the bar down and stop performing the lift. You will be offered a short rest (not to exceed 1 minute) before re-attempting the same or lower weight. If you fail to complete that second attempt you will be given a chance to complete a second record attempt at a lower weight. If you are successful on the first attempt, you will be allowed a second attempt a heavier weight to increase your score. 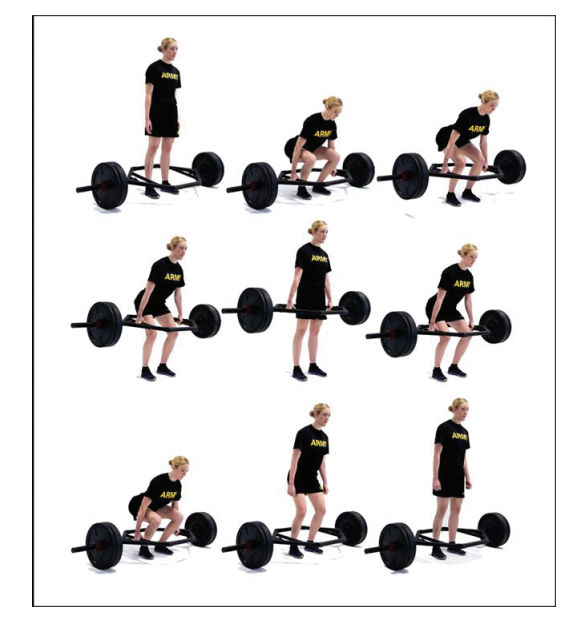 Interval Aerobic Run Instructions
The purpose of the Interval Aerobic Run is to assess aerobic capacity. This test involves running between two designated points that are 20 meters apart. The running pace is set by beeps at specific intervals. As the test progresses, the time between beeps gets shorter, requiring you to run faster. You will stand behind the starting line facing the second line 20 meters away. The test starts with a five-second countdown ending with three beeps. On the third beep you will slowly jog towards the opposite 20-meter line. You should touch the opposite line shortly before the next beep. If you arrive early, continue across the line, turn around, and wait for the next beep. After about one minute, the speed will increase to the next level as indicated by a beep-beep-beep. The time between beeps will now be closer together and you must run slightly faster. If you do not touch the line before the beep, you will be given a warning (example: “WARNING NUMBER 1,” “WARNING NUMBER 2”). If you receive a warning, you must keep running and touch the line, turn, and reach the next line before the next beep. If you fail to touch the 20-meter line for three consecutive shuttles, you will be told to stop. If you fail to reach the line for one or two consecutive shuttles, and then successfully reach the line on the third shuttle, the count for warnings will return to zero. This is a continuous running test. You may not stop or rest at any point. 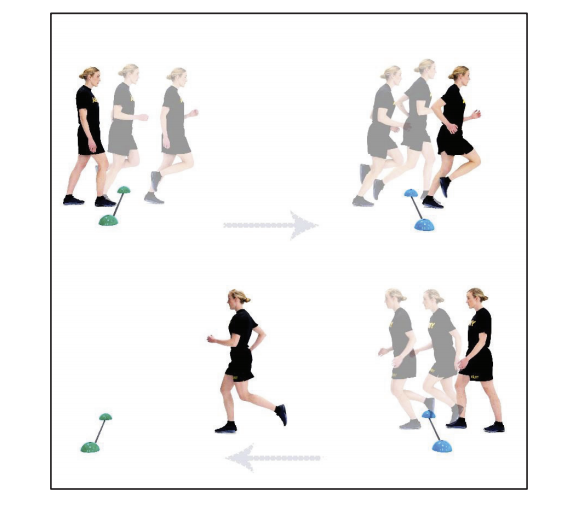 See page 17 of the Army Holistic Health and Fitness Testing document for more information on the OPAT standards.